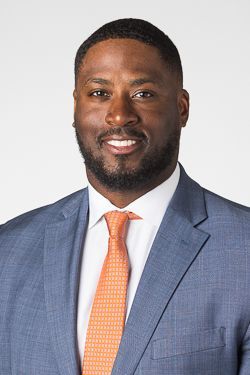 Will Johnson joined the Valpo football coaching staff for the 2022 season as running backs coach.

Johnson, who played in the NFL from 2012-2016 with the Pittsburgh Steelers and New York Giants, comes to Valpo after a stint as the running backs and special teams coach for the Pittsburgh Maulers of the United States Football League. He also gained coaching experience at his alma mater, West Virginia University, where he began as a graduate assistant coach for strength and conditioning in 2018 before being elevated to Director of Player and NFL Relations.

A native of Centerville, Ohio, Johnson was named to the 2012 midseason all-rookie team as a member of the Steelers and scored his first career touchdown in a 27-12 win over Washington. That came after he finished his undergraduate degree from West Virginia in multidisciplinary studies in 2011. During his college career, he transitioned from wide receiver to halfback and received numerous honors and accolades. Despite being undrafted, he eventually appeared in 63 games in the NFL and made 20 starts. He scored three NFL touchdowns, two receiving and one rushing.

What They’re Saying About Coach Johnson

Ben McAdoo, Carolina Panthers Offensive Coordinator, Former New York Giants Head Coach: “Hiring Will Johnson as running backs coach is a home run hire for Valparaiso University. His work ethic, character and knowledge of the game in all three phases will be a blessing to the program. I can’t think of a better man to help mentor and develop the players.”

Kirby Wilson, Pittsburgh Maulers (USFL) Head Coach, Former NFL Assistant Coach: “Will Johnson played and coached for me. He is an excellent addition to the Valpo football staff. Valpo is getting an up-and-coming star in the profession. He is a former NFL starting fullback and special teams standout who was an extremely hard worker both as a player and as a running backs coach in the USFL. Accountability, attention to details and preparation are just a few of his strengths. Valpo got a good one.”