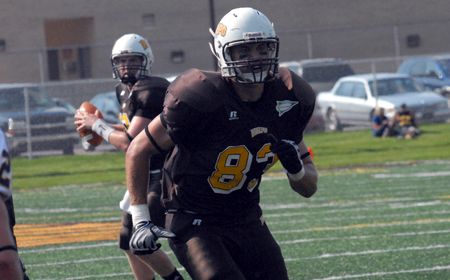 Drake limited Valparaiso to just 150 yards of total offense and seven first downs on Saturday, and spoiled Senior Day for the Crusaders with a 32-0 victory at Brown Field on a blustery, cold afternoon.

Special teams played a major role in the game, with the Bulldogs missing three extra points and having a field goal blocked while the Crusaders having a punt blocked and a fumble on a punt return.

“Special teams was a crucial part of today’s game,” head coach Stacy Adams said.  “The blocked punt was big as we’d have just gone into the locker room down 6-0 without it.  We just did not get it done on the special teams today.”

Drake had the game’s first chance of the game, driving to the Crusader 15-yard line on the opening possession before Logan Rees’ 41-yard field goal attempt was blocked.  The Bulldog defense forced Valpo to go three-and-out though, and the Crusaders’ punt was blocked and recovered at the Crusaders’ 10.

After a delay of game penalty, Pat Oliver ran 15 yards for a score to put the Bulldogs on top 7-0.  Both teams punted on their next possession, but Valpo fumbled their return at the end of the first quarter, setting Drake up at the Valpo 11.  The Crusaders dodged a bullet when a field goal attempt went wide left, but had their next series end with an interception.

Anthony Curry (Merrillville, Ind./Merrillville H.S.) stopped the Bulldogs with an interception in the end zone, the second straight possession Drake failed to score after starting in the red zone.

Valpo was unable to get the offense on track in the first half, though, and a Cole Ingle pass to Michael Bialas for 27 yards with 1:03 to play before halftime gave Drake its second touchdown of the half and a 13-0 lead at intermission.

Pat Oliver made it 20-0 Drake with 4:07 to play in the third with a seven-yard touchdown run, and the Bulldogs limited Valpo to just five yards in the quarter and no first downs.

Stephen Platek added a two-yard touchdown run with 12:26 to play in the game and Tom Kosteck had a 10-yard touchdown dash with 4:11 to play to close out the scoring.  Drake missed both extra points, with Adam Rundh (Aalborg, Denmark/Orjanskolan H.S.) blocking the final one.

“The defense played an outstanding first half and kept us in the game,” Adams added.  “Our offense struggled moving the ball all day.  It was a lack of execution.”

Warren Arnold (Mundelein, Ill./Mundelein H.S.) had nine carries for a team-high 25 yrads for Valpo and completed just 7-of-15 passes for 56 yards, including a 40-yarder to Ryan Myers (Chesterton, Ind./Chesterton H.S.).

Saturday marked the final game in the careers of 20 student-athletes for Valparaiso, which finished the season 3-8 overall and 2-6 in the PFL.