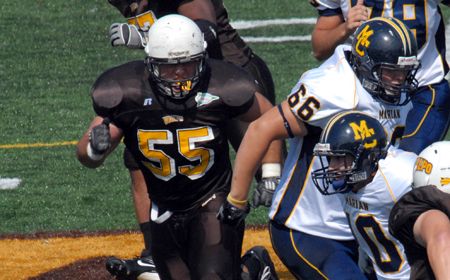 This Week in Crusader Football: Valparaiso will wrap up the 2008 regular season on Saturday afternoon at Brown Field hosting Drake.  The Crusaders are looking for back-to-back victories following a 33-point win at Campbell last weekend.  Prior to kickoff, 20 Valpo seniors will be honored as part of Senior Day activities.

On the Air: For the fourth straight season, the Valpo Sports Radio Network will be home to all 11 Crusader football games in 2008.  The Valpo Sports Radio Network consists of WVUR (95.1-FM, Valparaiso), WAKE (1500-AM, Valparaiso), and WE-FM (95.9-FM, Michigan City).  Andy Viano will handle all the play-by-play with Josh Weinhold adding the color commentary for this week’s contest.  The game can also be heard online at www.valpoathletics.com.

Scouting Drake: The Bulldogs had their three-game winning streak snapped last Saturday afternoon with a 41-9 loss at Jacksonville.  Drake is winless on the road this season but finished the home campaign with a 5-1 mark, and a win in the season finale would give the Bulldogs their fifth consecutive season over .500.  Cole Ingle and Ben Osterman have split time at quarterback this season while Andy Green leads the defense with 56 tackles and five interceptions.  Drake is tied with Valpo for the top spot in the PFL with a +10 turnover margin, including a PFL-leading 14 fumble recoveries.

Wrapping Up Campbell: After allowing an opening kickoff return for a touchdown, Valparaiso scored 41 unanswered points on the way to a 47-14 rout of Campbell last Saturday in Buies Creek, N.C.  Anthony Curry returned one of four Crusader interceptions on the day for a touchdown and John Popper had a punt return for a score.  Valpo rushed for 342 yards on the afternoon, including 148 by Ross Wiemer.  The Crusader defense limited the Camels to just 158 total yards on the day.

Popper Earns PFL Honors: John Popper’s 48-yard punt return for a touchdown against Campbell helped garner the junior PFL Special Teams co-Player of the Week accolades.  He had 135 all-purpose yards for the game, including three punt returns for a 24.7-yard average.

Curry’s Pick Six Gives Him PFL Lead: Anthony Curry intercepted his PFL-leading sixth pass last Saturday at Campbell and returned it 38 yards for a touchdown.  The junior now has nine picks in three seasons for the Brown and Gold.

Offense Comes Out of the Gates Quick: Valparaiso has scored on its first drive of the game in seven of the 10 contests this season.  On five occasions the Crusaders have found the end zone, while settling for a field goal on the two others.

Wiemer Runs Wild at Campbell: Ross Wiemer racked up the second 100-yard rushing game of his career at Campbell.  The junior tallied 148 yards on 21 carries, and scored his 10th touchdown of the season.  Wiemer ranks second in the PFL averaging 80.3 yards per game this season.  As a team, Valpo leads the PFL with 184.8 yards per game on the ground, a mark that is also tied for 26th best in all of NCAA-I FCS.

Pass Defense Still Among Nation’s Best: Valpo’s pass defense ranks 12th in all of Division I-FCS allowing just 151.6 yards per game.  The Crusaders have also intercepted 16 opposing passes.  Seven of the 10 opponents have thrown for less than 150 yards against Valpo this year.

Looking to Finish .500 at Home: With a win against Drake, Valpo would finish .500 (3-3) at Brown Field this season, the first time the Crusaders would have accomplished the feat since the 2004 campaign.

Rundh Repeats as Academic All-District Selection: For the second straight season Adam Rundh has been named to the ESPN The Magazine’s All-District V First Team as selected by CoSIDA.  The junior defensive end has 34 tackles this season, including 4.5 for loss.

Kozey an ARA Sportsmanship Award Finalist: Senior Ryan Kozey is one of 10 finalists nationally for the ARA Sportsmanship Award that recognizes an athlete’s character and leadership as it translates to sportsmanship.  Kozey, an offensive tackle and team captain, is a civil engineering major on the Dean’s list who has helped with fund-raising for diabetes, AIDS, and cancer.  The award recipient will be announced in December.

PFL Weekly Honors: Valpo was the recipient of all three PFL Players of the Week following the Davidson game on October 11.  Ross Wiemer earned Offensive accolades while Anthony Curry was the Defensive Player of the Week.  David Hamaker grabbed the Special Teams award.

Arnold Moves Into Eight All-Time in Passing: Warren Arnold sits in eighth place all-time passing at Valparaiso with 2,969 yards.  Most recently he moved past Noel Schlegelmilch (1957-1960) and Cortie Wilson (1977-1979) on the all-time list.

Valpo Picked to Finish Seventh in Preseason Poll: The Crusaders were selected to finish in a tie for seventh place in the Pioneer Football League, but can finish as high as a tie for fifth or sixth with a win against Drake, depending on other results.