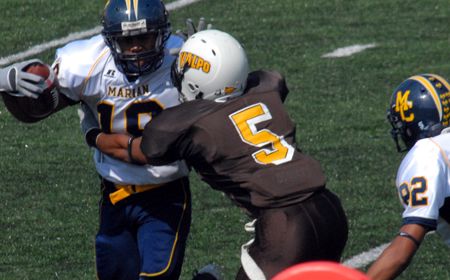 Anthony Curry looks to lead the defense in 2009.

With Valparaiso set to kick off spring practice on Monday, March 30, head coach Stacy Adams has announced the 2009 football schedule, which will see the Brown and Gold play at Brown Field six times.

The Crusaders will open the season at home on September 5 against region foe Saint Joseph’s (Ind.) before heading to Wisconsin to battle Concordia one week later.  After a bye week in mid-September, Valpo will close the non-conference slate on September 26 at home against Carthage.

The Pioneer Football League slate begins on October 3 in Des Moines, Iowa when the Brown and Gold face Drake.  One week later, the Crusaders return to Brown Field for Homecoming when San Diego comes to town.  The annual Battle for the Hoosier Helmet takes place in Indianapolis, Ind. on October 17 against Butler before the Crusaders return home to face Dayton for Parents’ Day.

Two straight games away from home, October 31 and November 7, wrap up the road portion of the schedule when the Crusaders face Marist, the newest addition to the PFL, and Jacksonville.  Valpo then closes the campaign with back-to-back home games against Campbell and Morehead State, the latter being Senior Day on November 21.

On December 5, the PFL champion will host the Northeast Conference champion in the fourth annual Gridiron Classic.

The Crusaders are set to open spring practice on Monday, and will work out every Monday, Wednesday, Friday, and Saturday through April 25, with the exception of Saturday, April 11.  The weekday practices will be from 3:30-6 while Saturday practices run from 10 a.m. through 12:30 p.m.  Valpo will hold a modified version of a spring game at Brown Field on April 25 to wrap up spring practice.