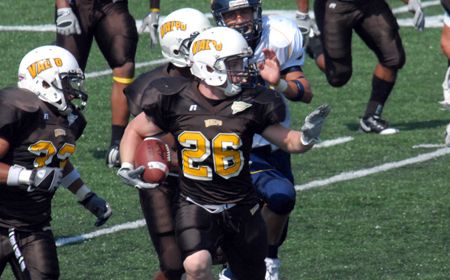 With the start of the 2009 season right around the corner, Valparaiso University is set to begin the 89th installment of Crusader football under fourth-year head coach Stacy Adams.  Adams returns 34 letterwinners from last year’s team which finished the year 3-8, and will be looking to replace six starters on each side of the football for the upcoming campaign.

The coaching staff has brought in 55 newcomers to the program for the upcoming season to mesh with the 67 total returnees.  With many positions up for grabs as the year begins, the underclassmen will have an opportunity to make an immediate impact with the program.

Offense
Backfield
Under center, Valparaiso will be quite youthful at the quarterback position heading into the new season.  The Crusaders will look to replace Warren Arnold, who graduated at the end of 2008 ranked eighth on Valpo’s all-time passing list with 3,025 career yards.  A pair of redshirt-sophomores enter the season as the leading candidates to take over the reigns of the offense.  Matt Upshaw is the only quarterback on the roster that has taken a snap while classmate Bobby Wysocki will also battle for signal-calling duties.

Upshaw saw action in five games for the Crusaders in 2008, including a start in Valpo’s win at Campbell.  A multidimensional quarterback, he threw for more than 200 yards and two touchdowns in limited action while also rushing 32 times for 119 yards.  Wysocki got reps with the Valpo reserve team in his rookie season, and will look to transition to the varsity squad this year.

Valpo’s running game has been its strength offensively the last two years, and will be relied upon heavily again this year to help shoulder the load for the Crusaders.  The Brown and Gold led the Pioneer Football League each of the last two seasons, rushing for 175.2 yards per contest in 2008.

Ross Wiemer returns for his senior season with the Brown and Gold after averaging nearly 75 yards per game as a junior, finishing second among all PFL rushers.  The Second Team All-PFL selection found the end zone 10 times last season while rushing for more than 800 yards, and enters 2009 needing just 310 yards on the ground to move into the top-10 all-time on Valpo’s career rushing list.  John Popper joins Wiemer in the backfield giving the Crusaders a solid tandem at tailback.  Popper went over 1,000 yards for his career with his performance last season, allowing Adams the flexibility of choosing either back depending on the situation.

Senior fullback Josh Lynn has been a mainstay in the backfield since his freshman season.  In addition to a handful of carries each year, Lynn is a solid blocker that helps both the run game as well as the passing game.  Junior Zack LaBarre and sophomore Isaiah Spears will also be looking for action at fullback this year.

Receivers and Tight Ends
Valpo wide-outs will be led by fifth-year senior Nicholas Henton who has made at least 12 catches in each of his first three seasons with the Brown and Gold.  A pair of redshirt-sophomores, Sean McCarty and Ryan Myers, both saw a great deal of action in their first season on the field, and will look to made an even larger impact this year.  McCarty made the most of his catches, hauling in a pair of touchdowns among the three grabs he made, while Myers had a team-leading 21 receptions for 269 yards during his rookie season.

Travis Anderson and David Coneys both saw time at wide receiver as well for the Crusaders in 2008, and will see even more action in the upcoming season.

Coach Adams will also be looking for a tight end to emerge this season following the graduation of Tom Oswald.  Alex Petrik, Ryan O’Shea, and Matthew Niehus all entered camp looking to make an impression in an attempt to earn the starting spot.

Offensive Line
The Crusader offensive line may be the most youthful position on the field this season as the Brown and Gold looks to replace three starters from last season.  The line will be especially important as Valpo tries to establish a running game yet again this season.  David Wisniewski is the only returnee that started every game a year ago, and will look to hold down the right guard spot this year.  Steve Lara will move to tackle this season after starting several games at center in 2008.

On the left side, Nate Blair and Tayler Aiello both saw spot action during their freshman seasons, but will be called upon to fulfill much bigger roles this year.  Gavin Grillo and Tim Flynn are the only other returnees on the offensive line, and they both played on the reserve team in 2008.

Defense
Defensive Line
Led by Honorable Mention All-PFL selection Adam Rundh, the Crusader defensive line will look to be a catalyst for Valpo when its opponents have the football.  During his first three years with the Brown and Gold, nearly a third of Rundh’s 88 tackles have been for loss, including 10.5 quarterback sacks.  On the other side of the defensive line, classmate Ian Altieri will look to start for the first time in his career.  He had his best season of his career to date in 2008.

Chris Lyda, who also saw a little bit of action on the field a year ago, along with Brian Plachinski, will look to back up the defensive end positions.

The interior of the Crusader defensive line will look to be anchored by Nikko Carson and Brett Heber.  Carson made 28 tackles during his rookie campaign while Heber came on during the end of his freshman season to play in the final six games of the year.  Chris Gardner and Aran Boz also will look to rotate in the middle for Valpo in the upcoming year.

Linebackers
Valpo’s linebacking corps will consist of three new starters in 2009.  Zac Griffin, who missed the 2008 season with an injury, will look to lead the Crusaders in the middle.  He made 40 tackles in 2007 before getting hurt, and will look to return to the same form this year.

James Joos and JaVon Welch each saw a great deal of playing time one year ago, and will look to move into a starting assignment this year.  Joos made 13 stops while playing every game for Valpo while Welch had 30 tackles and recovered a pair of fumbles.

Junior Luke Kanclerz will move from defensive back to linebacker this year as well to help add depth to the position.  He has appeared in every game Valpo has played since he began his career with the Brown and Gold.  Grant Bushong and Marco Porcelli will both be in the mix at linebacker as well for the Crusaders.

Secondary
The Crusader secondary may be the strength of the defense heading into 2009.  Anthony Curry had a stand-out junior season at cornerback in which he earned Honorable Mention All-PFL honors.  Curry led the conference and was ranked among the nation’s leaders with seven interceptions in addition to making 49 tackles on the season.

At the other corner, Kyle Himmelwright returns for his fifth season as well.  The team’s top returning tackler, he made 55 stops a year ago, and intercepted four passes of his own.  After picking up experience on special teams, Adrian Gober will look to back up the corner position heading into 2009.

Eli Crawford and Roger Satur will roam the middle of the field again for the Crusaders this season.  Crawford heads into his junior season having made nearly 80 stops and five interceptions during his first two years at Valparaiso.  Satur has also played in all 22 games during his career thus far, making 17 tackles last season in a reserve roll.  Mike Miller and Alex Byers will also look to rotate in at the safety spots this season.

Special Teams
Kicking
Valpo returns four kickers for the upcoming season that saw action last year, and enters this season with a great deal of depth at the position.  Mitch Secrest has handled the punting duties for the past three years, and has seen his average rise by more than two yards per kick from his rookie season.  Last year he landed 15 punts inside the 20-yard line for the Crusaders.

Andrezj Skiba took over the place-kicking duties late in 2008, and sent nearly a quarter of his kickoffs for touchbacks.  As a freshman, he also made both of his field goal attempts.

Chris Smith handled the kickoffs for a portion of 2008 as well and returns for another season, as does David Hamaker.  Hamaker, a junior, made six-of-eight field goals and 11-of-13 extra point attempts one year ago.

Returners
In addition to his duties as a running back, Popper earned Second Team All-PFL accolades as a return specialist in 2008.  He averaged nearly 23 yards per kickoff return for the Crusaders while ranking fourth in the PFL in that category.  He was equally as good with punt returns, ranking third in the PFL averaging 12 yards per effort while returning one punt for a touchdown.  Popper should handle the return game again this season.

As the 2009 season begins, Adams and the coaching staff will be faced with the challenge of blending the youth at several positions with the experience-laced seniors at other spots on the field.  How that plays out will determine the success the Crusaders have on the field this year as Valparaiso looks to climb the standings in the Pioneer Football League.

With the season kicking off September 5 against Northwest Indiana rival Saint Joseph’s, it will not take long to determine where the Crusaders stack up.  A successful non-conference slate would set up the season heading into the PFL schedule, which begins at Drake on October 3.  If the upperclass leadership can mix with some talented youngsters that  look to break into the lineup, as the season winds down with several home games, the Crusaders could be playing meaningful games in late November.