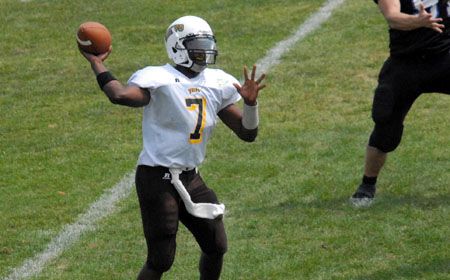 The Pumas scored 24 points in the final 9:24 of the game to break open a close game.

The host Pumas had the first opportunity of the game to score, taking the opening kickoff down field before Kyle Himmelwright (Coplay, Pa./Whitehall H.S.) forced a fumble that Eli Crawford (Bogart, Ga./North Oconee H.S.) pounced on in the end zone to give Valpo the football.

Neither team could find the scoreboard in the opening quarter though, as Valpo’s defense forced two three-and-outs after the initial drive.  In the second quarter, the Crusaders struck first as Chris Smith (Manistee, Mich./Manistee H.S.) made his first career field goal, a 34-yarder, with 5:17 remaining before halftime.

Valpo took the 3-0 lead into the break, but the Pumas took the lead on their first possession of the second half.  Terrence Freeman scored the first of his three touchdowns from a yard out at the 10:35 mark of the third quarter.  The Crusaders answered with another field goal by Smith, this one from 47 yards, with 2:53 to play in the quarter, to make it 7-6 heading into the final 15 minutes.

“Smith did a good job battling back to make two field goals after missing his first one,” Adams said.  “We need to score touchdowns though.”

The Pumas extended the lead to 14-6 as Robert Dutton caught a 12-yard touchdown pass from Mike Hladek with 9:24 to play.  Freeman then busted through the middle for a 44-yard touchdown run on Saint Joseph’s next drive.  He would add another 39-yard score in the final two minutes after the Pumas tacked on a field goal to increase the lead.

Freeman finished the game with five carries for 108 yards and the three scores as Saint Joseph’s (1-1) tallied 311 total yards of offense.  John Popper (Dublin, Ohio/Coffman H.S.) led the Crusaders with 13 carries for 38 yards and six catches for 39 yards.  Matt Upshaw (Indianapolis, Ind./Warren  Central H.S.) was 14-for-25 passing for 127 yards for the Crusaders.

“In the first half we did a good job of controlling the game with the run and we kept their offense off of the field,” Adams concluded.  “They keyed on Popper more in the second half and we weren’t able to move the ball as well.”

Valparaiso (0-1) will look for its first victory of the season next Saturday in Mequon, Wis. as the Crusaders take on Concordia.  Kickoff is set for 1 p.m. with all the action carried live on the Valpo Sports Radio Network and online at www.valpoathletics.com.

Game Notes: Valpo is now 46-40-3 all-time in season openers and 23-16-2 in openers on the road … Saint Joseph’s leads the series 32-28-2 … Valpo’s longest play from scrimmage was a 39-yard pass from Upshaw to Nicholas Henton (Chicago, Ill./De La Salle H.S.) which set up the third quarter field goal … Crawford’s fumble recovery was the first of his career while Himmelwright’s forced fumble was his first since his freshman year (2006) … Smith’s 47-yard field goal was the longest by a Crusader since Andrew McCawley kicked a 47-yarder in 2004.