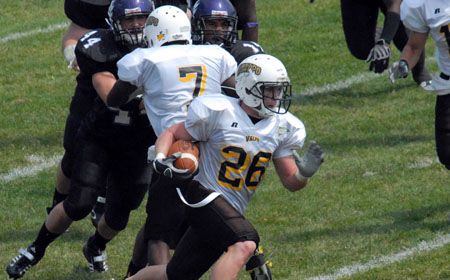 John Popper did a little of everything for Valpo in last week's opener. (Ray Acevedo)
Related Links

This Week in Crusader Football: Valparaiso remains on the road on Saturday afternoon as the Crusaders seek their first victory of the season when the Brown and Gold battle Concordia (Wis.) in a battle of Lutheran institutions.  Following the game the Crusaders will have a week off prior to their home opener on September 26.

On the Air: For the fifth straight season, the Valpo Sports Radio Network will be home to all 11 Crusader football games in 2009.  The Valpo Sports Radio Network consists of WAKE (1500-AM, Valparaiso) and WE-FM (95.9-FM, Michigan City).  Todd Ickow will handle all the play-by-play with Dick Harlan adding the color commentary for this week’s game.  The game can also be heard live online at www.valpoathletics.com.  Live stats will not be available online for this week’s contest.

Series Notes: Valpo and Concordia are meeting for just the second time.  In last year’s first meeting between the two schools, Valpo rolled up 449 yards of offense on the way to a 34-10 victory at Brown Field.  Ross Wiemer rushed for two touchdowns while Warren Arnold threw for 170 yards and a score.  This will be the first trip to Century Stadium for the Brown and Gold.

Head Coach Stacy Adams: Stacy Adams is in his fifth season at the helm of the Crusader football program, taking over the team prior to the 2005 season.  Adams has a 14-31 record both overall and at Valpo.  He is the 15th head coach in Crusader history, and just the sixth since 1946.

Scouting Concordia: The Falcons also opened their 2009 season last Saturday, suffering a 52-10 setback against Bethel (Minn.).  A 77-yard pass from Anthony Gonzales to Montrell Davidson accounted for the only touchdown of the afternoon for Concordia as the Falcons were held to just 204 yards of total offense.  Defensively Andrew Hobus led the Falcons with 11 tackles.

Wrapping Up Saint Joseph’s: Valparaiso battled the Pumas into the fourth quarter, leading 3-0 at halftime and trailing just 7-6 with 10 minutes to play before the hosts scored 24 unanswered points to post a 31-6 victory in Rensselaer, Ind.  Matt Upshaw completed 14-of-25 passes for 127 yards while John Popper led the ground game with 38 yards on 13 carries.  Chris Smith’s two field goals accounted for the Crusader scoring on the day.

From Long Range: Chris Smith kicked the first two field goals of his collegiate career last Saturday afternoon against Saint Joseph’s (Ind.) to account for all of the Crusader scoring.  His first field goal came from 34 yards out.  He then booted a 47-yarder in the third quarter, Valpo’s longest made field goal since Andrew McCawley also made one from 47 yards in 2004.

Crawford Recovers First Fumble: Eli Crawford pounced on a loose football in the end zone for his first fumble recovery of his career on the first drive of the season last week.  The Crusaders recovered just eight fumbles in all of 2008, and were even in turnover margin in last week’s game.

Curry Surpasses 100 Tackles: Anthony Curry made three stops last week to move over the century mark for his career.  The senior defensive back now has 102 tackles in his career, including 59 solo stops.  In addition, Curry has 10 career interceptions.

Popper Does It All in Week 1: Senior John Popper racked up 154 all-purpose yards in the season opener against Saint Joseph’s (Ind.).  He rushed for 38 yards as Valpo’s starting tailback, while adding 39 yards in receptions.  He also had 77 yards in kickoff returns and returned one punt for zero yards.