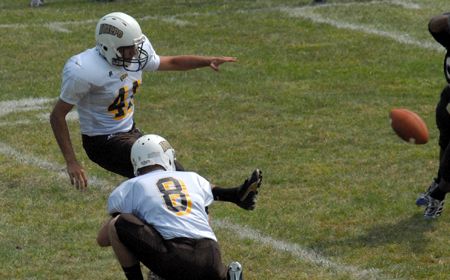 This Week in Crusader Football: Valparaiso returns to Brown Field on Saturday afternoon for its 2009 home opener as the Crusaders host the Red Men of Carthage.  The Crusaders are looking to build upon their 20-17 victory at Concordia (Wis.) two weeks ago as they play their final non-conference game of the season.

On the Air: For the fifth straight season the Valpo Sports Radio Network will be home to all 11 Crusader football games in 2009.  The Valpo Sports Radio Network consists of WAKE (1500-AM, Valparaiso) and WE-FM (95.9-FM, Michigan City).  Todd Ickow will handle all the play-by-play with Andy Viano adding the color commentary.  The game can also be heard live online at www.valpoathletics.com.  In addition, WVUR (95.1-FM, Valparaiso) will also broadcast this week’s game with student announcers.  Live stats will be available for the game through www.valpoathletics.com.

Series Notes: Valpo and Carthage are meeting for just the second time ever.  The only other meeting between the two schools took place on October 21, 1950 when the Crusaders posted a 60-0 victory over Carthage at Brown Field.

Head Coach Stacy Adams: Stacy Adams is in his fifth season at the helm of the Crusader football program, taking over the team prior to the 2005 season.  Adams has a 15-31 record both overall and at Valpo.  He is the 15th head coach in Crusader history, and just the sixth since 1946.

Scouting Carthage: The Red Men have opened the season with back-to-back victories following a 50-34 win over Lakeland last Saturday.  Evan Jones completed a school record 40 passes for 446 yards as Carthage rolled up 621 yards for the game.  Brian Hipchen leads the defense with 13 tackles and two interceptions.

Wrapping Up Concordia (Wis.): A 24-yard touchdown pass from Bobby Wysocki to John Popper midway through the fourth quarter put the Crusaders on top for good on September 12 as Valpo defeated the Falcons 20-17 in Mequon, Wis.  The Crusader defense held Concordia on the final drive of the game, stopping the Falcons’ at the Valpo 15-yard line.  Wysocki completed 8-of-18 passes for 133 yards and rushed for 39 more while Tim Bennett had four grabs for 81 yards.  James Joos made 11 tackles for the Crusaders, including 2.5 for loss.

Valpo in Home Openers:  Valpo is 48-38-2 in its previous 88 home openers at Brown Field.  The Crusaders have won two straight home openers, including a 34-10 triumph over Concordia (Wis.) last season.

A Late Start at Home: September 26 marks the latest the Crusaders have started a home campaign since 1974 when Valpo hosted Butler on September 28 in the second game of the season.  In 1982, the Brown and Gold opened the home slate on September 25 against Hillsdale.

From Long Range: Chris Smith has kicked two field goals in each of the first two games of the season to lead the Pioneer Football League and rank fifth nationally in field goals per contest.  His 47-yarder against Saint Joseph’s (Ind.) is Valpo’s longest made field goal since Andrew McCawley also made one from 47 yards in 2004.

Crawford a Turnover Machine: Eli Crawford pounced on a loose football in the end zone for his first fumble recovery of his career on the first drive of the season against Saint Joseph’s (Ind.).  He then added Valpo’s second turnover of the season against Concordia (Wis.) with an interception in the third quarter at the Crusader 13-yard line.

In the Backfield: James Joos, Adam Rundh, and Nikko Carson have made a living in the backfield for the Crusaders this season.  Joos, who leads the team with 14 tackles, has 2.5 tackles for loss while Carson has three.  Rundh also has three tackles for loss, including 1.5 sacks.