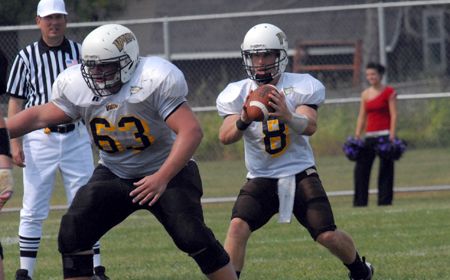 Valparaiso piled up a season-high 440 yards of total offense on Saturday afternoon, but it was not enough as Carthage spoiled Valparaiso’s 2009 home opener with a 34-24 victory over the Crusaders at Brown Field.

Ross Wiemer (Burlington, Wis./Burlington H.S.) rushed for 112 yards and two touchdowns while Bobby Wysocki (Calumet City, Ill./Thornwood H.S.) passed for a career-high 252 yards and another score for the Crusaders.

Carthage (3-0) jumped on top on the opening drive of the game, moving 75 yards in 11 plays before Evan Jones found Jeff Koeneman from six yard out in the corner of the end zone.

The Crusaders responded with a scoring drive of their own, as Wiemer burst up the middle from 12 yards out to tie the game at seven.  The Red Men added another touchdown before the end of the quarter as John Seigler scored from two yards out.  Ian Altieri (Highland, Ind./Highland H.S.) blocked the extra point though, keeping it 13-7 after one.

Wiemer’s second touchdown run of the game on the Crusaders’ next possession put the Brown and Gold on top 14-13.  The senior running back, who had the first 100-yard rushing game of the season for Valpo, ran up the middle before breaking to the outside to score from 36 yards out.

The Red Men scored twice more before halftime to take a 27-14 lead into the break though.  An eight-yard pass from Jones to Jake Smith and a six-yard run by Seigler gave Carthage the 13-point advantage.

Chris Smith (Manistee, Mich./Manistee H.S.) brought Valpo to within 10 with a 43-yard field goal on the opening drive of the third quarter.  The Crusaders threatened again on the first drive of the fourth quarter, but a blocked field goal kept the game at 27-17.

Carthage added to the lead as Alex Annes returned an interception 16 yards for a touchdown with 10:25 to play in the game before the Crusaders tried to rally.

Wysocki found David Coneys (Sebastian, Fla./Sebastian River H.S.) open over the middle and the sophomore outran the defense on the way to a 63-yard touchdown with 4:11 to play.  Valpo moved the ball down to the Carthage 18-yard line before an interception in the final minute ended the Crusaders hopes of a comeback.

Carthage totaled 389 yards of offense, including 323 through the air as Jones completed 28-of-41 passes.  Rick Loisi had four grabs for 102 yards while Seigler rushed for 76 on the ground with two scores.

Valparaiso (1-2) will open Pioneer Football League play next Saturday in Des Moines, Iowa with a 1 p.m. game against Drake.  The game can be heard live on the Valpo Sports Radio Network.

Game Notes: The all-time series is tied 1-1, with the only other meeting coming in 1950 … Valpo is now 48-39-2 in home openers … Popper finished the game with 173 all-purpose yards … Eli Crawford (Bogart, Ga./North Oconee H.S.) intercepted a pass in the fourth quarter giving him three takeaways this season (two interceptions, one fumble recovery) … Coneys’ touchdown reception came on the first catch of his career … Bennett went over 100 yards receiving for the first time as a Crusader.