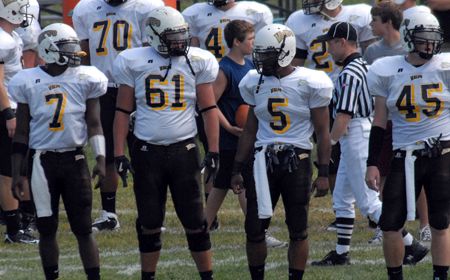 This Week in Crusader Football: Valparaiso opens its 17th season of Pioneer Football League play on Saturday afternoon as the Crusaders head to Des Moines, Iowa to battle Drake.  The Crusaders are one of just three PFL schools to have yet to open league play this season.

Series Notes: Valpo and Drake are meeting for the 17th time in a series that began when the PFL was formed in 1993.  The Bulldogs hold a 13-3 all-time advantage and have won five straight games, including last year’s 32-0 win at Brown Field in the season finale.  Valpo’s last win came in overtime, 51-45, at Brown Field on October 25, 2003.  Drake is 7-0 against the Crusaders in Des Moines.

Head Coach Stacy Adams: Stacy Adams is in his fifth season at the helm of the Crusader football program, taking over the team prior to the 2005 season.  Adams has a 15-32 record both overall and at Valpo.  He is the 15th head coach in Crusader history, and just the sixth since 1946.

Scouting Drake: The Bulldogs are coming off of a bye week following a 51-21 loss at South Dakota on September 19 and already own a PFL victory, 34-6, at Marist in early September.  Drake is led offensively by quarterback Mike Piatkowski who has completed 67.4% of his passes this season for just under 200 yards per game and three touchdowns.  Three receivers have more than 100 yards in receptions already for the Bulldogs.  Defensively, Tyler Moorehead has 24 total tackles, including 4.0 for loss. he has forced two fumbles and intercepted another pass.

Wrapping Up Carthage: Ross Wiemer rushed for 112 yards and two touchdowns but Valpo could not overcome a 13-point halftime deficit, falling to the Red Men 34-24 at Brown Field last Saturday.  Bobby Wysocki threw for 252 yards and a touchdown while the Crusader defense registered eight tackles for loss and two takeaways.

All-Time in the PFL: Valpo holds a 27-53 conference mark since joining the PFL in 1993 from the Midwest Intercollegiate Football League.  The Crusaders won PFL titles in both 2000 and 2003 and finished runner-up in 1999.

Crawford a Turnover Machine: Eli Crawford has been involved in three of Valpo’s four takeaways this season.  He recovered a fumble in the season opener against Saint Joseph’s (Ind.) before intercepting a pass against Concordia (Wis.) and again last week against Carthage.  He now has seven career interceptions in three years.

Success on Fourth Down: Valpo leads the PFL in fourth down conversions this season with a perfect 100% success rate.  Valpo has converted all four fourth down attempts this year, including two last week against Carthage.

Wiemer Goes for 100+: Ross Wiemer rushed for 112 yards last week for the Crusaders in less than three quarters of action.  The senior running back surpassed the century mark for the third time in his career, with the other two occasions coming in 2008 when he rushed for a career-high 170 yards against Davidson.

Homecoming Around the Corner: Valparaiso will return home next weekend (October 10) for its annual Homecoming game, hosting San Diego.  Football is one of five home sporting events at Valpo that weekend.

Jarring the Ball Loose: Valpo forced four fumbles last weekend against Carthage, but were able to pounce on just one of the loose footballs.  For the season the Crusaders have forced five fumbles already, recovering two of them.

No Dirty Laundry Here: Valpo is the least penalized team in the Pioneer Football League this season.  The Crusaders have averaged just 33.3 yards of penalties per game this year, having been flagged just 15 times for a total of 100 yards.  Opponents, on the other hand, have racked up more than 75 yards per game in infractions on 22 penalties.