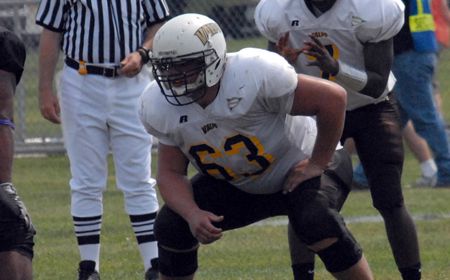 This Week in Crusader Football: Valparaiso welcomes its alumni back to campus this Saturday afternoon as the Crusaders return to Brown Field for the annual Homecoming football game when the Brown and Gold entertain San Diego.

Series Notes: Valpo and San Diego are meeting on the gridiron for the 17th time since the two schools joined the PFL in 1993.  The Toreros lead the overall series 11-5, and have won five straight games, including a 42-14 victory in California last season.  The Crusaders’ last win in the series came on October 18, 2003 at Brown Field, 41-34 during Valpo’s PFL championship season.

Head Coach Stacy Adams: Stacy Adams is in his fifth season at the helm of the Crusader football program, taking over the team prior to the 2005 season.  Adams has a 15-33 record both overall and at Valpo.  He is the 15th head coach in Crusader history, and just the sixth since 1946.

Scouting San Diego: The Toreros are coming off of a heartbreaking 25-24 last second loss at Butler last weekend and are returning to the Hoosier State for the second straight Saturday.  J.T. Rogan leads the San Diego offense, rushing for 168 yards on the season as well as returning kickoffs.  Defensively, Derek Pilkington has 30 tackles for the Toreros while Loka Kanongatta has five stops for loss.

Wrapping Up Drake: The Bulldogs scored 24 unanswered points after Valparaiso pulled within 10-7 on Saturday afternoon, on the way to a 34-14 victory over the Crusaders last Saturday in Des Moines, Iowa.  Bobby Wysocki threw for 145 yards and a touchdown while rushing for another 50 yards and Nate Goergen connected on his first touchdown pass as well.  Nikko Carson registered eight tackles, including four sacks, for the Brown and Gold to lead the defense.

Player of the Week: Defensive lineman Nikko Carson recorded four sacks last Saturday at Drake, the most in a single game in the NCAA-FCS this season.  The sophomore earned Pioneer Football League Defensive Player of the Week honors for his work, which included eight total tackles, all of the solo variety. His four sacks also tie the Pioneer Football League’s single game record in that category.  Carson ranks fourth in the nation averaging 1.25 sacks per game this season.

Sack Attack: Including Carson’s four sacks, Valpo got to the Drake quarterback seven times as a team last week to continue their backfield prowess.  The Crusaders rank third nationally averaging 8.75 tackles for loss per game this year as well as 16th in sacks averaging 3.0 per game as a team.

Making the Grab: Tim Bennett ranks fifth in the PFL in receiving, averaging 68 yards per game.  The redshirt-freshman already has 17 receptions on the season for the Crusaders.

Success on Fourth Down: Valpo leads the PFL in fourth down conversions this season with an 83.3% success rate.  Valpo has converted five of six fourth down attempts this year, including one last week against Drake.

Give Him Six: Fifth-year senior Nicholas Henton hauled in a touchdown pass from Bobby Wysocki, his first scoring grab since 2007.  For Henton, it was his fourth career touchdown.

Making the Stop: JaVon Welch leads the Crusaders with 31 tackles this season, including 13 solo stops.  The redshirt-sophomore has also broken up a pair of passes on the year.

Wysocki Fifth in Passing: Bobby Wysocki ranks fifth in the PFL in passing averaging 132.5 yards per game.  He played in the opener as the holder on special teams, but threw just two passes.  If you take that game out of the equation, he is averaging 176.6 yards per game, which would be fourth in the conference.

Throwing the Ball: Valpo has thrown for more yardage their its opponents in three of the first four games this season.  On the other hand, opponents have outrushed the Crusaders in three of four games.