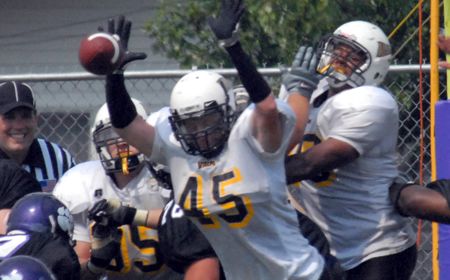 Eli Crawford (Bogart, Ga./North Oconee H.S.) returned an interception for a touchdown and Valparaiso took a lead into the fourth quarter on Saturday afternoon for the first time this season, but Butler rallied with two touchdowns in the final 15 minutes to defeat the Crusaders 23-14 at the Butler Bowl in Indianapolis, Ind.

With the win, the Bulldogs retain the Hoosier Helmet, the traveling trophy that goes to the winner of this rivalry game.

“Butler is a good football team,” head coach Stacy Adams said afterwards.  “They are one of the best teams in the league.  We played hard but we made some key mistakes in key situations today that you just can’t make against good teams.”

The Crusader defense kept the Brown and Gold in the football game, limiting the Pioneer Football League’s leading offense to just 94 first half yards.  Valpo moved the football on the opening drive before being stopped on downs at the Butler 48-yard line.

The Bulldogs finally cracked the scoreboard with 1:56 to play in the opening quarter, as David Lang connected on a 38-yard field goal.  Valpo looked to answer on its next possession, but Chris Smith’s (Manistee, Mich./Manistee H.S.) field goal attempt from 45 yards out came up short.

Both teams traded punts throughout the second quarter until Roger Satur (Mansfield, Texas/Nolan Catholic H.S.) picked off a pass and returned it to the Bulldog 27-yard line right before halftime.  A Crusader interception ended the threat and the teams went into the locker room with Butler holding a 3-0 lead.

Butler (6-0, 3-0 PFL) got the ball to start the second half but Crawford picked off his third pass of the year and raced down the sidelines for the score to put Valpo on top 7-3.

After a Bulldog punt, the Crusaders marched down field again.  Quinn Schaefer (Roanoke, Ind./Bishop Luers H.S.) connected with Nicholas Henton (Chicago, Ill./De La Salle H.S.) for 44 yards to set Valpo up at the one-yard line.  Schaefer then snuck the ball in from a yard out to put the Brown and Gold on by 11, 14-3, with 6:48 to play in the third.

The Bulldogs answered the score with a touchdown of their own on a four-yard run by Ryan Hitchcock.  Butler then forced a fumble on the final play of the third quarter, and moved the ball 58 yards before Scott Gray scored from seven yards out for the go ahead touchdown.

Butler tried to run the clock out, but a fumble recovery by Brett Heber (Glenview, Ill./Glenbrook South H.S.) at the Valpo five gave the Crusaders one more chance with 2:03 to play in the game.  Valpo could not manage a first down though, and turned the ball over on downs, setting up a two-yard run by Hitchcock in the final two minutes for the final score of the game.

“Wildermuth had to step up with two starters down,” Adams said.  “He went out and played well.  He ran the ball hard.  Our defense played hard as well and created some turnovers.  I was happy with how they played.”

Valparaiso (1-5, 0-3) will return to Brown Field next Saturday for a Parents’ Day battle against Dayton.  Kickoff is set for 1 p.m.