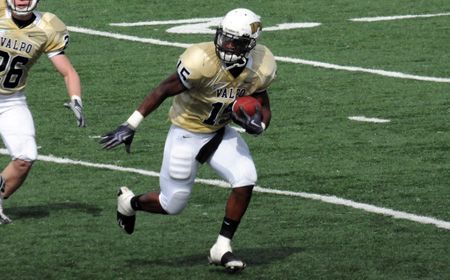 The fumble recover was one of three turnovers the Crusaders forced in the opening half.  The first came on Dayton’s second drive of the game as Roger Satur (Mansfield, Texas/Nolan Catholic H.S.) stripped Flyer ball carrier Dan Jacob at the goal line and Zac Griffin (Apple Valley, Calif./Granite Hills H.S.) pounced on it.

Satur also picked off his second pass in as many weeks late in the second quarter.

“In the first half we did a good job of forcing turnovers,” head coach Stacy Adams said.  “However, offensively we need to take the momentum from that, move the ball, and capitalize.”

Steve Valentino put the Flyers on top with a pair of first half touchdowns, one on a one-yard quarterback sneak and another on a 42-yard run.  He also added his third touchdown of the game to open the third quarter after Dayton had a 17-7 lead at intermission.

Brandon Wingeier had a 57-yard interception return for a touchdown late in the third and Jacob added a score in the fourth quarter.

Isaac Wildermuth (Sidney, Ohio/Upper Arlington H.S.) had 12 carries for 24 yards to lead Valpo’s offense while Goergen was 4-of-12 passing for 33 yards.  Henton had four receptions on the day.

Valparaiso (1-6, 0-4) will take to the road for the next two weeks, heading to Poughkeepsie, N.Y. next Saturday for an 11 a.m. CDT game against Marist.