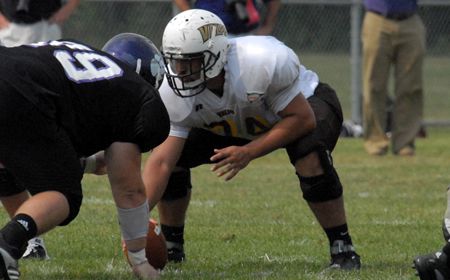 Ferdinand Velez is one of 11 Crusaders to start every game this season. (Ray Acevedo)
Related Links

This Week in Crusader Football: Valparaiso heads to New York this weekend to battle the newest member of the Pioneer Football League.  The Crusaders and Marist will tangle on Halloween with the Brown and Gold looking to pick up its first conference victory of the year.  The game marks the beginning of Valpo’s final road trip of the season.

Series Notes: Valpo and Marist are meeting on the gridiron for the first time ever.  This will be the first time the Crusaders have played the Red  Foxes in any team sport.  Marist joined the PFL prior to this season.

Head Coach Stacy Adams: Stacy Adams is in his fifth season at the helm of the Crusader football program, taking over the team prior to the 2005 season.  Adams has a 15-36 record both overall and at Valpo.  He is the 15th head coach in Crusader history, and just the sixth since 1946.

Scouting Marist: The Red Foxes are undefeated in the month of October and have won three straight games following a 24-14 victory at Morehead State last Saturday afternoon.  Running back O’Neil Anderson leads the Marist rushing game averaging 87.0 yards per game, ranking second in the PFL.  Quarterback Chris Debowkis has thrown for more than 1,000 yards and six touchdowns this season, three to James LaMacchia who has 779 yards receiving.  Defensively, Nick Andre leads the team with 62 total tackles, including 9.5 for loss.

Wrapping Up Dayton: Nicholas Henton hauled in a 28-yard touchdown pass from Nate Goergen midway through the second quarter to make it 14-7, but the Flyers scored the game’s final 24 points on the way to a 38-7 victory over the Crusaders last Saturday.  Dayton’s defense allowed Valpo to gain just 60 total yards of offense on the afternoon.  Steven Valentino rushed for 127 yards and three touchdowns while throwing for 188 yards for Dayton.

Block Party: Laurence Treadaway blocked the first kick of his career, a field goal try, last Saturday afternoon against Dayton.  James Joos picked up the loose ball, and lateralled to Kyle Himmelwright, who returned the blocked kick 58 yards to the Flyer 42-yard line. It was the second blocked kick for the Crusaders this season, with Ian Altieri blocking one against Carthage.  Valpo has blocked seven kicks over the past two seasons.

Making the Picks: Eli Crawford made his team-leading third interception of the season at Butler and returned it 60 yards for a touchdown to give the Crusaders a 7-3 lead early in the third quarter.  The junior defensive back now has eight career picks in less than three seasons and is tied for the PFL leads in interceptions this season.

Who’s Carrying the Ball Now?: Fourteen different players have had at least one rushing attempt for Valpo this season.  Bobby Wysocki leads the team in rushing with 203 yards on the ground this season.

MASH Unit: Valparaiso has fallen victim to the injury and illness bug throughout the season.  Out of 22 starting positions between offense and defense, 35 different players have earned at least one start this season.  Only 11 players have started all seven games for the Brown and Gold this season.  Of the 11, five comprise the offensive line as Nate Blair, Gavin Grillo, Steve Lara, Ferdinand Velez, and David Wisniewski have started every game.

Pinning Them Deep: Punter Mitch Secrest had two of his best outings of the season the last two weeks.  Against Butler he landed three of his four punts inside the Bulldogs’ 20-yard line to help the Crusaders in the field position battle.  Last week against Dayton he punted a career-high 12 times, averaging 35.8 yards per kick, more than two yards better than his average entering the game.

Satur Becoming a Turnover Machine: After not registering a turnover during the first 27 games of his career, Roger Satur has tallied three over the last two weeks. The junior defensive back made his first collegiate interception at Butler two weeks ago before picking off his second pass in as many weeks last week against Dayton.  Satur also forced a fumble near the goal line keeping the Flyers out of the end zone.

Perfect on Point Afters: Valparaiso has made all 11 extra point tries following touchdowns this season.  The Crusaders and Morehead State are the only schools in the PFL in PAT tries this year.  Chris Smith has made all eight of his attempts while Andrzej Skiba is 3-for-3 himself.