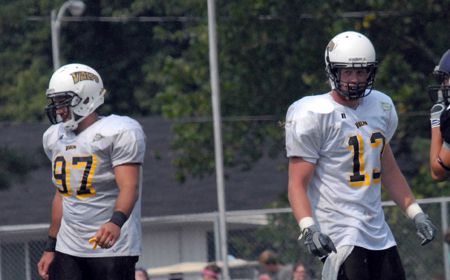 This Week in Crusader Football: Valparaiso wraps up the road portion of the 2009 football season on Saturday afternoon, heading to the Sunshine State to face Jacksonville.  The Crusaders will then begin a two-game homestand next Saturday to wrap up the year.

On the Air: For the fifth straight season the Valpo Sports Radio Network will be home to all 11 Crusader football games in 2009.  The Valpo Sports Radio Network consists of WAKE (1500-AM, Valparaiso) and WE-FM (95.9-FM, Michigan City).  Todd Ickow will handle all the play-by-play with Andy Viano adding the color commentary.  The game can also be heard live online at www.valpoathletics.com.  Live stats will not be available for this week’s game.

Series Notes: Valpo and Jacksonville are meeting for just the sixth time in a series that dates back to 2003, when the Dolphins joined the Pioneer Football League.  Jacksonville holds a 3-2 series advantage following a 40-24 victory over the Crusaders at Brown Field one year ago.  The series is deadlocked 1-1 in the Sunshine state following Valpo’s thrilling come-from-behind 29-27 win on November 3, 2007.

Head Coach Stacy Adams: Stacy Adams is in his fifth season at the helm of the Crusader football program, taking over the team prior to the 2005 season.  Adams has a 15-37 record both overall and at Valpo.  He is the 15th head coach in Crusader history, and just the sixth since 1946.

Scouting Jacksonville: The Dolphins had their two-game winning streak snapped last Saturday with a 45-38 setback at Drake.  Jacksonville has the league’s second best offense to date, averaging 29.0 points per game and 368.2 yards per contest.  Quarterback Josh McGregor has thrown for more than 2,000 yards already this year and has 23 touchdown tosses.  Rudell Small has carried 152 times for 776 yards and four scores. Josh Philpart has hauled in 44 grabs for nearly 100 yards per game and 10 touchdowns.  Defensively, Joseph Fennell has a team-leading 67 tackles.

Wrapping Up Marist: The Red Foxes broke open a defensive struggle with 17 third quarter points on the way to a 24-0 win over Valpo last Saturday in Poughkeepsie, N.Y.  JaVon Welch led the Crusaders with 12 tackles and an interception.  Marist’s defense limited Valpo to just 153 total yards for the contest.

Trio Among PFL Active Leaders in Picks: Valparaiso has the top three active players in the Pioneer Football League for interceptions on its current roster.  Anthony Curry leads all PFL players with 10 career interceptions while Eli Crawford and Kyle Himmelwright each have eight in their career.  Crawford is the only one of the three with an interception this season, and has three of them, second in the PFL this season.

Who’s Carrying the Ball Now?: Fifteen different players have had at least one rushing attempt for Valpo this season.  Bobby Wysocki leads the team in rushing with 232 yards on the ground this season.

MASH Unit: Valparaiso has fallen victim to the injury and illness bug throughout the season.  Out of 22 starting positions between offense and defense, 35 different players have earned at least one start this season.  Only 10 players have started all eight games for the Brown and Gold this season.  Of the 10, five comprise the offensive line as Nate Blair, Gavin Grillo, Steve Lara, Ferdinand Velez, and David Wisniewski have started every game.  In fact, only 19 players have seen action in all eight contests this year.

Welch Making the Stops: JaVon Welch has moved into sixth place among the PFL leaders in tackles made this season, averaging eight stops per contest.  The redshirt sophomore linebacker made a team-high 12 tackles last Saturday at Marist and also added his first career interception.

Carson Drops 10 in the Backfield: Nikko Carson registered his 10th tackle for loss of the season last weekend at Marist.  The sophomore defensive lineman has 3.5 more tackles for loss than any other Crusaders and also leads the team with five quarterback sacks.

Perfect on Point Afters: Valparaiso has made all 11 extra point tries following touchdowns this season.  The Crusaders and Morehead State are the only schools in the PFL perfect in PAT tries this year.  Chris Smith has made all eight of his attempts while Andrzej Skiba is 3-for-3 himself.

Converting on Fourth Down: Valpo is second in the PFL in fourth down conversions this season.  The Crusaders have been successful on 7-of-13 opportunities (53.8%), trailing just Dayton (54.5%).

Looking for the Ball Late: Valpo has averaged just 5:56 of possession time in the fourth quarter this season.  The Crusaders have had the ball longer than their opponents in the final 15 minutes just once this year, when Valpo had it for 9:24 at Drake.  The Brown and Gold has not had the football for more than seven minutes in any other game, and just one contest (Saint Joseph’s) with the ball more than six minutes in the fourth quarter.