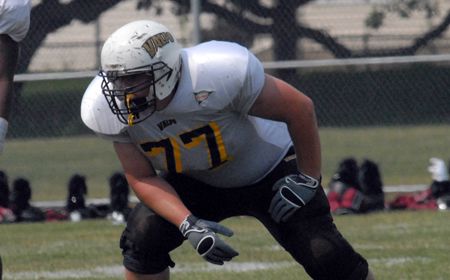 This Week in Crusader Football: Valparaiso begins its final homestand of the 2009 season on Saturday afternoon as the Crusaders return to Brown Field to host Campbell.  The Fighting Camels will be making their first appearance ever in Valpo.

On the Air: For the fifth straight season the Valpo Sports Radio Network will be home to all 11 Crusader football games in 2009.  The Valpo Sports Radio Network consists of WAKE (1500-AM, Valparaiso) and WE-FM (95.9-FM, Michigan City).  Dick Harlan will handle the play-by-play this week with Mike Targonski adding the color commentary.  The game can also be heard live online at www.valpoathletics.com.  WVUR (95.1-FM, Valparaiso) will also broadcast Saturday’s game.  Live stats will be available through www.valpoathletics.com.

Series Notes: Valpo and Campbell are meeting for the second time ever on Saturday.  The Crusaders won last year’s first meeting 47-14 on November 15 in Buies Creek, N.C.  In that win the Crusaders scored 24 third quarter points to break open a three-point halftime lead.  Campbell is making its first appearance ever at Brown Field.

Head Coach Stacy Adams: Stacy Adams is in his fifth season at the helm of the Crusader football program, taking over the team prior to the 2005 season.  Adams has a 15-38 record both overall and at Valpo.  He is the 15th head coach in Crusader history, and just the sixth since 1946.

Scouting Campbell: The Fighting Camels are coming into the game looking to bounce back from a 49-6 loss at Drake last Saturday.  Daniel Polk leads the team both throwing and running, having passed for nearly 1,100 yards and five touchdowns this season while also rushing for 431 yards and four scores.  Defensively, Lee Stanley leads Campbell with 74 total tackles.  Kicker Adam Willets has made eight straight field goal attempts since missing his first two of the season.

Wrapping Up Jacksonville: The Dolphins scored 28 unanswered points late in the second quarter through early in the fourth to break open a close game and defeat the Crusaders 49-20 last Saturday in Jacksonville, Fla.  Nate Goergen threw a pair of touchdown passes, one to Ryan Myers and the other to Sean McCarty, while Nick Jones added a two-yard run for a score for the Brown and Gold.

Henton Has Career Day: Nicholas Henton had his best game as a Crusader last week against Jacksonville.  The fifth-year receiver had six grabs for 97 yards, just missing his first career 100-yard performance.  Henton has 914 career yards, needing just 86 more for 1,000.

Goergen Connects: Nate Goergen turned in Valpo’s top passing performance of the season last Saturday against Jacksonville, connecting on 21-of-35 for 261 yards and two touchdowns.  He entered the game having thrown for just 108 yards all season.

Curry Continues to Make Picks: Anthony Curry made his first two interceptions of the season at Jacksonville, giving him 12 for his career now, most among active PFL players.  The senior has had at least one interception each season with the Brown and Gold.

Trio Find the End Zone: Nick Jones scored his first collegiate touchdown last Saturday at Jacksonville on a two-yard run early in the second quarter.  Sean McCarty and Ryan Myers each hauled in touchdown passes as well, their first of the season for the Crusaders.  McCarty now has three career scores while Myers has two.

Who’s Carrying the Ball Now?: Fifteen different players have had at least one rushing attempt for Valpo this season.  Bobby Wysocki leads the team in rushing with 232 yards on the ground this season.

MASH Unit: Valparaiso has fallen victim to the injury and illness bug throughout the season.  Out of 22 starting positions between offense and defense, 36 different players have earned at least one start this season.  Only 10 players have started all nine games for the Brown and Gold this season.  Of the 10, five comprise the offensive line as Nate Blair, Gavin Grillo, Steve Lara, Ferdinand Velez, and David Wisniewski have started every game.  In fact, only 20 players have seen action in all nine contests this year.

Treadaway Leads the Defense: Laurence Treadaway tied his career high with eight tackles last Saturday in Jacksonville, all of the solo variety.  The junior defensive back also had eight stops against Carthage earlier this season and has 38 total on the year.  He leads the Crusaders with two fumble recoveries.