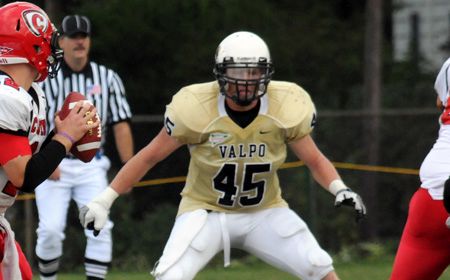 Valparaiso’s defense gave up a season-low 17 points, but the offense could not find the end zone on Saturday afternoon as the Crusaders fell 17-3 to Campbell at Brown Field.

Andrzej Skiba’s (Homewood, Ill./Homewood-Flossmoor H.S.) 20-yard field goal with 8:16 remaining in the game accounted for the Crusaders’ lone points on the afternoon.

“We struggled to move the football again today,” head coach Stacy Adams said.  “Their offense was their best defense, limiting us to just 22 plays in the first half.”

Campbell jumped on top on the game’s opening possession, moving 82 yards in seven plays for a touchdown and C.J. Oates ran the ball in from four yards out.

Adam Willets added to the lead with 13:30 to play before halftime with a 20-yard field goal to make it 10-0 Fighting Camels.

Kyle Himmelwright (Coplay, Pa./Whitehall H.S.) returned the ensuing kickoff to the Campbell 49 and the Crusaders drove down to the 23 before an interception ended the scoring threat.

The visitors capitalized on the miscue, scoring on a two-yard run by Carl Smith to make it 17-0 Campbell at the break.

Valpo’s defense stiffened in the second half, not allowing any more points on the scoreboard, but the Crusader offense could not find the end zone.  The lone scoring drive saw Valpo march down to the one before being pushed back and having to settle for a field goal.

“I was really pleased with the way the defense played in the second half,” Adams added.  “They came out and pitched a shutout.”

Campbell (3-7, 2-5 PFL) held Valpo to just 160 total yards on the afternoon, including just 65 through the air.  The Fighting Camels tallied 450 yards of offense, including 282 on the ground.

Daniel Polk rushed for 105 yards for Campbell while completing 10-of-17 passes for 168 yards.

Valparaiso (1-9, 0-7) will wrap up the 2009 season next Saturday on Senior Day, hosting Morehead State.  Kickoff is slated for noon.

Game Notes: The all-time series is tied 1-1 … Curry now has three interceptions in the last two games … Crawford’s pick was his team-leading fourth of the season … fifth-year senior Zac Griffin (Apple Valley, Calif./Granite Hills H.S.) registered his first sack of the season … Skiba is a perfect 3-for-3 in his career in field goal tries.