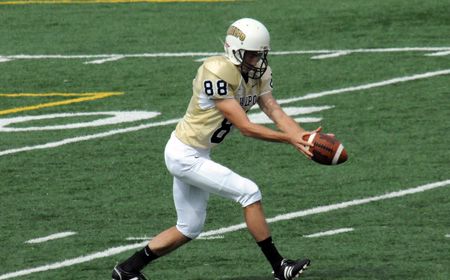 Mitch Secrest is one of 16 seniors being honored on Saturday. (Ray Acevedo)
Related Links

This Week in Crusader Football: Valparaiso closes out the 2009 football season on Saturday afternoon at Brown Field as the Crusaders host Morehead State.  Prior to kickoff, 16 members of the Valpo football program will be honored on Senior Day.

On the Air: For the fifth straight season the Valpo Sports Radio Network will be home to all 11 Crusader football games in 2009.  The Valpo Sports Radio Network consists of WAKE (1500-AM, Valparaiso) and WE-FM (95.9-FM, Michigan City).  Todd Ickow will handle the play-by-play with Andy Viano adding the color commentary.  The game can also be heard live online at www.valpoathletics.com.  WVUR (95.1-FM, Valparaiso) will also broadcast Saturday’s game.  Live stats will be available through www.valpoathletics.com.

Series Notes: Valpo and Morehead State are meeting for the 15th time in a series that dates back to the 1996 season.  The Eagles have won 11 of the first 14 contests all-time, including two straight meetings.  Last year Morehead State posted a 44-10 win over the Crusaders in Kentucky.  Valpo’s last win in the series came down in Morehead, a 42-35 triumph in the 2006 season.  The Eagles are 7-1 against Valpo at Brown Field, with the Crusaders’ lone triumph coming in the 2003 PFL championship game.

Head Coach Stacy Adams: Stacy Adams is in his fifth season at the helm of the Crusader football program, taking over the team prior to the 2005 season.  Adams has a 15-39 record both overall and at Valpo.  He is the 15th head coach in Crusader history, and just the sixth since 1946.

Scouting Morehead State: The Eagles are entering the game also looking for their first PFL win of the season while trying to snap a seven-game losing skid following a 13-7 loss to San Diego last Saturday.  Wes McDermott leads Morehead State defensively with 100 tackles, including 16 for loss, ranking eighth in the nation.  The Eagles are fifth in the country against the run, allowing just 78.2 yards per game on the ground.

Wrapping Up Campbell: The Fighting Camels scored a pair of first half rushing touchdowns on the way to a 17-0 halftime lead and hung on for a 17-3 victory over the Crusaders last Saturday at Brown Field.  Andrzej Skiba’s 20-yard field goal with 8:16 remaining accounted for Valpo’s lone score on the afternoon.

Welch Has Solid Season: With a team-leading 12 tackles last week against Campbell, JaVon Welch continues his stellar season.  He leads Valpo with 63 total tackles, including four for loss.  He has also added an interception, forced a fumble, and recovered another this year.

Henton Looks for 1,000 Career Yards: Senior Nicholas Henton needs 82 yards to reach the 1,000 mark for his career.  He already has a career-high 335 yards worth of grabs this year.

Curry Continues to Make Picks: Anthony Curry made his first two interceptions of the season two weeks ago at Jacksonville, and added another last week against Campbell, giving him 13 for his career now, most among active PFL players.  The senior has had at least one interception each season with the Brown and Gold.

MASH Unit: Valparaiso has fallen victim to the injury and illness bug throughout the season.  Out of 22 starting positions between offense and defense, 38 different players have earned at least one start this season.  Only nine players have started all 10 games for the Brown and Gold this season.  Of the 10, five comprise the offensive line as Nate Blair, Gavin Grillo, Steve Lara, Ferdinand Velez, and David Wisniewski have started every game.  In fact, only 18 players have seen action in all nine contests this year.

Fourth Down Success: Valparaiso has had success on fourth down conversions this season, converting 7-of-16 tries (43.8%).  The percentage is third best in the Pioneer Football League this season

Player of the Week: Defensive lineman Nikko Carson recorded four sacks at Drake on October 3, the most in a single game in the NCAA-FCS this season.  The sophomore earned Pioneer Football League Defensive Player of the Week honors for his work, which included eight total tackles, all of the solo variety. His four sacks also tie the Pioneer Football League’s single game record in that category.