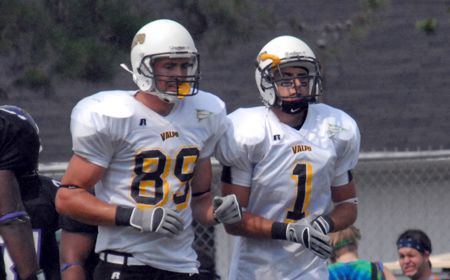 Valparaiso saw its 2009 season come to a close on Saturday afternoon, dropping a 29-6 game to Morehead State on Senior Day at Brown Field.

“I wish it would have been a better ending for our seniors,” head coach Stacy Adams said after the game.  “They did a lot of good things over their careers and worked hard for us.”

The Crusaders jumped on top early, as Sean McCarty (Waukesha, Wis./West H.S.) hauled in an 11-yard touchdown reception from Nate Goergen (Golden, Colo./Golden H.S.) just 7:06 into the opening quarter.  The point after try was blocked, but Valpo led 6-0.

Morehead State (3-8, 1-7 PFL) answered on its ensuing possession as Ranier Duzan connected from 43 yards out with a field goal to cut the Crusader advantage in half with 3:13 to play in the first.  Duzan’s second field goal of the game, this time from 29 yards, tied the game at six early in the second quarter.

The two schools went into the locker room deadlocked.  Following a Crusader interception, Duzan connected from 28 yards out for his third field goal of the game, putting Morehead State on top 9-6 heading into the final quarter.

A pair of J.D. Cecil interceptions in the fourth helped the Eagles pull away.  He returned a pick 23 yards for a touchdown with 13:59 remaining to push the lead to 15-6.  Late in the fourth he returned another interception down to the Crusader six and three plays later Jerrod Pendleton found the end zone from three yards out.

On the ensuing kickoff, a Valpo (1-10, 0-8) fumble allowed the Eagles to recover at the Crusader 25 and Kevin Thomas pulled in a 25-yard touchdown grab from Zach Lewis.

“As has been the case all year, we have to learn how to play for 60 minutes,” Adams added.  “We played three good quarters but not four.  At this point we need to put this season in the past and start getting ready for next year.”

Valpo tallied just 137 yards of offense on the afternoon, with the Eagles limiting the Crusader run game to just 15 yards.  McCarty led the receiving corps with five grabs for 52 yards while Ryan Myers (Chesterton, Ind./Chesterton H.S.) had four catches for 46 yards.

The Eagles finished the game with 274 total yards of offense, as Zack Lewis completed 17-of-33 passes for 164 yards.

Game Notes: Morehead State leads the all-time series 12-3 and has won three straight meetings … Rundh finished his career at Valpo with 33 tackles for loss, including 12.5 sacks … he blocked four kicks, including the PAT on Saturday … JaVon Welch (Grand Rapids, Mich./Ottawa Hills H.S.) finished with a team-leading 71 tackles on the season, including eight against Morehead State … Nicholas Henton (Chicago, Ill./De La Salle H.S.) finished with three catches for 14 yards to finish with 932 career yards.