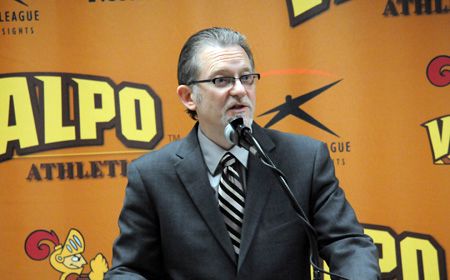 Valparaiso University director of athletics Mark LaBarbera has announced that Dale Carlson has been named the 16th head football coach in Crusader history.

“Coach Carlson has all the attributes we set out to find in our head football coach,” LaBarbera said.  “He has a proven record of success on the field, a commitment to the success of student-athletes, and an understanding on how to build a championship program.  We are very excited about the style of play he will bring to Brown Field and the enthusiasm he has demonstrated for creating quality football here at Valpo.

Carlson arrives at Valpo from Ohio Dominican University in Columbus, Ohio, where he guided the Panthers to a 36-27 record over the past six seasons, including 7-3 marks each of the last two years.  The 2009 season marked his 21st year as a collegiate head coach overall, where he has posted a 110-103-3 career mark.

“I am very excited to be the next head football coach at Valparaiso University,” Carlson said.  “For years Valpo has been known for its strong academic programs.  I really believe the combination of academics and renewed commitment to the football program will result in an atmosphere that will lead to success on the field.”

At Ohio Dominican, Carlson began the program prior to the 2004 season.  He led the Panthers to an undefeated regular season in 2007 and a Mid-States Football Association-Mideast League championship.  ODU went on to defeat The Cumberlands in the NAIA playoffs before finishing the season 12-1 overall.  The Panthers’ offense led all of college football averaging more than 50 points per game, while leading NAIA with more than 550 yards of total offense in that same season.

Prior to his stint at Ohio Dominican, Carlson spent eight seasons as the head football coach at Tri-State University in Angola, Ind.  Here he also began the intercollegiate football program, leading the school to 11 victories in 1998.  That same season he led the Thunder to the NAIA semifinals and a number three ranking nationally in the final NAIA poll.  He also led Tri-State to the Mideast Conference championship in 2001, the same season he was named league’s Coach of the Year.

Carlson has also spent four seasons as the head coach at Taylor University in Upland, Ind. as well as three seasons at Lakeland College in Sheboygan, Wis.  He began his collegiate coaching as the offensive line coach at ElmhurstCollege and also served as an assistant coach at Franklin College and Grand Valley State University prior to his first head coaching position.

A linebacker in college, Carlson earned his Bachelor of Arts at Concordia University-Chicago majoring in physical education while earning a Master of Science in Education from Chicago State University.

Carlson takes over for Stacy Adams, who stepped down as head coach in late November.

“It is going to be a challenge, but if our current players commit to what our coaching staff asks them to do, I fully believe we can compete at the top of the Pioneer Football League,” Carlson stated.  “I am looking forward to recruiting student-athletes who aspire to greatness in the classroom, on the football field, and want to help us build a championship program at Valparaiso University.”