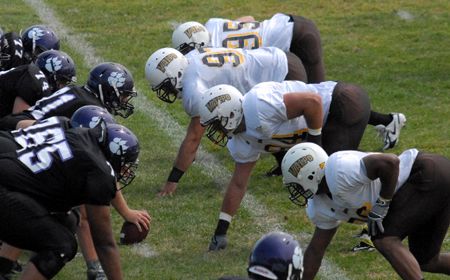 Valparaiso will play its annual spring Brown and Gold football game Saturday morning at Brown Field beginning at 11 a.m.  This year’s format will feature the offense against the defense and admission is free.

The game is the culmination of 15 days of spring practice, and will be the first spring game at Valpo for new head coach Dale Carlson.

“This spring has been very productive,” Carlson said.  “Our first order of business was teaching our team how our staff wanted them to practice.  We are leaving spring practice with greater understanding of that.”

The scoring for this year’s game has been set, and for the offense will play like a normal game for touchdowns, PATs, and field goals.  In addition, the offense can get a point for three consecutive first downs, while also picking up a point for a run play of more than 10 yards or a pass play longer than 15 yards.

The defense still scores six points for a touchdown and two points for a safety, but can tally three points for a turnover or a three-and-out.  A sack will allow the defense to garner two points while a sudden change, where the offense gets the ball inside the 35 yard line and does not score or is held to a field goal, will net them four points.

“As a staff, we needed to see how our players would respond to the new offensive and defensive systems,” Carlson said.  “We have made good progress on both sides of the ball.  However, there is a lot of work to do before we open the season against Western Illinois.”

Carlson currently has 71 returnees on the roster from the 2009 season.  The Crusaders will open the 2010 regular season on Thursday night, September 2, against Western Illinois in Macomb, Ill.  Kickoff is set for 6 p.m.