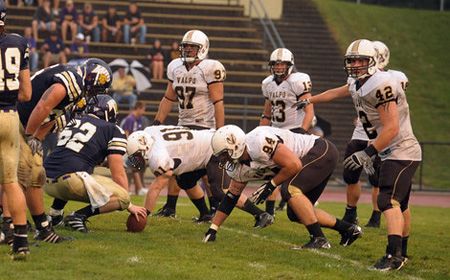 This Week in Crusader Football: Valparaiso heads south on Saturday afternoon, but remains in the Hoosier State as the Crusaders take on Franklin.  Both schools are looking to bounce back from opening weekend setbacks with their first victory of the season.  After this week, the Crusaders will play five of their next seven games at home at Brown Field.

On the Air: For the sixth straight season the Valpo Sports Radio Network will be home to all 11 Crusader football games in 2009.  The Valpo Sports Radio Network consists of WAKE (1500-AM, Valparaiso) and WE-FM (95.9-FM, Michigan City).  Todd Ickow will handle all the play-by-play with Dick Harlan adding the color commentary this week.  The game can also be heard live online at www.valpoathletics.com.  Live stats will also be available for the game through www.valpoathletics.com.

Head Coach Dale Carlson: Dale Carlson is 0-1 in his first season with the Crusaders and 110-104-3 overall entering his 22nd season as a collegiate head coach.  He arrived at Valpo from Ohio Dominican where he was 7-3 last season and 36-27 over six years.  He began the Ohio Dominican program from scratch in 2004, just as he did at Tri-State University prior to his tenure with the Panthers.  He is now the 16th head coach in Valpo history, and just the seventh since 1946.

Series Notes: Franklin leads the all-time series 10-3 with all of the previous meetings coming between 1977 and 1989.  The two schools were members of the Heartland Collegiate Conference together for 12 seasons.  The Grizzlies have won the last three meetings between the two schools, including a 38-7 win at Franklin on Oct. 7, 1989.  Valpo’s last win in the series came at Franklin, 41-14, on Sept. 27, 1986.

Wrapping Up Western Illinois: Valpo hung with the Leathernecks for awhile, but three fourth quarter touchdowns broke the game open last Thursday as Western Illinois defeated the Crusaders 45-0 in Macomb, Ill.  The Crusaders trailed just 10-0 right before halftime before a fumble resulted in a late Leatherneck touchdown heading into the locker room.  Valpo managed just 131 yards of offense for the game, including 49 on the ground, while Western Illinois tallied 569 total yards, including 339 yards rushing.

Scouting Franklin: The Grizzlies opened the season last Saturday suffering a 30-27 setback at Carthage College.  Franklin led 13-3 late in the first half before Carthage scored 27 of the next 34 points.  Kyle Ray and Nick Purichia split time at quarterback, combining to throw for 372 yards and three touchdowns.  The Grizzlies gave up 431 yards of total offense though.  Franklin went 7-3 overall and 5-2 in the Heartland Collegiate Athletic Conference in 2009, and returns 36 letterwinners for this season.

Who’s Got the Ball?: The Crusaders had eight different players carry the football in the season opener at Western Illinois as part of the Brown and Gold rushing attack.  Eddie Morelli led Valpo with 14 carries while Isaac Wildermuth had 11 rushes for a team-high 32 yards.  Valpo managed just 49 total yards on the ground in the opener though against the NCAA I-FCS scholarship program.

Gokan Brings Them Down: Cody Gokan registered a career-high 17 tackles, including 10 solo stops against the Leathernecks in the season opener.  In 10 games in 2009, Gokan made a total of 39 tackles.  The 17 stops led the Pioneer Football League and rank third in all of NCAA I-FCS.

Sack Attack: Nikko Carson registered two quarterback sacks in the season opener at Western Illinois, adding to his career total.  The junior had five sacks in 2009, and now has 7.5 for his career wearing the Brown and Gold.  In addition, Carson now has 16 total tackles for loss at Valpo.

Knocking Them Away: Eli Crawford had three big pass break-ups last Thursday in Macomb.  One of the passes he defended nearly was an interception, but Crawford was ruled out of bounds.  Several plays later the junior knocked down a fourth down pass.  Crawford has nine career interceptions as well for the Brown and Gold.

Wood Kicks Them Deep: Making his collegiate debut, sophomore punter Greg Wood had a solid opening night for Valpo.  He punted nine times for a 40.1-yard average with a long of 55 yards.  He also landed three of the punts inside the Leathernecks 20-yard line.

Historic Night Set for Communiversity Day: The Crusaders’ home opener against Saint Joseph’s (Ind.) next Saturday, Sept. 18 will mark the first night football game ever played on the Valparaiso University campus.  The game is also part of Communiversity Day at Valpo, which also includes a home volleyball match against Butler (at 4 p.m.), a tailgate complete with a barbeque dinner, and a fun-filled carnival atmosphere.  A fireworks display will cap the night’s activities.

This and That: Nate Goergen completed 13-of-24 passes for 81 yards in the opener ... Eric Slenk led Valpo with 88 all purpose yards, all coming on kickoff returns ... Matt Heinen had nine tackles in his Crusader debut ... Valpo’s kickoff coverage led the PFL in week one ... the Crusaders were penalized just five times for 44 yards in the season opener.