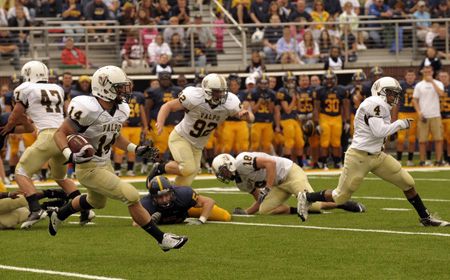 This Week in Crusader Football: Valparaiso opens the 90th home season of Crusader football on Saturday evening as the Brown and Gold host region rival Saint Joseph’s (Ind.) at Brown Field.  Saturday is Communiversity Day, and also marks the first night football game ever played on the Valparaiso University campus.

On the Air: For the sixth straight season the Valpo Sports Radio Network will be home to all 11 Crusader football games in 2009.  The Valpo Sports Radio Network consists of WAKE (1500-AM, Valparaiso) and WE-FM (95.9-FM, Michigan City).  Todd Ickow will handle all the play-by-play with Andy Viano adding the color commentary this week.  The game can also be heard live online at www.valpoathletics.com.  Live stats will also be available for the game through www.valpoathletics.com.

Head Coach Dale Carlson: Dale Carlson is 0-2 in his first season with the Crusaders and 110-105-3 overall entering his 22nd season as a collegiate head coach.  He arrived at Valpo from Ohio Dominican where he was 7-3 last season and 36-27 over six years.  He began the Ohio Dominican program from scratch in 2004, just as he did at Tri-State University prior to his tenure with the Panthers.  He is now the 16th head coach in Valpo history, and just the seventh since 1946.

Series Notes: One of the oldest rivalries in Valparaiso’s history, the Crusaders and Pumas meet on the gridiron for the 63rd time this Saturday.  Former foes in the Indiana Collegiate Conference, Valpo and Saint Joseph’s first met back in 1921, a 52-0 Crusader victory.  The Pumas lead the all-time series, though, 32-28-2, having won each of the last four contests between the two schools, including a 31-6 victory in Rensselaer last season.

Wrapping Up Franklin: Franklin jumped out to a 14-0 lead less than four minutes into the game and never relinquished it as the Grizzlies defeated the Crusaders 42-7 last Saturday in Franklin, Ind.  Eddie Morrelli scored Valpo’s lone touchdown on a four-yard run late in the opening quarter.  Franklin totalled 568 yards of total offense while Valpo managed just 209.  Eli Crawford had two interceptions for the Brown and Gold while Cody Gokan led the defense with 13 tackles.

Scouting Saint Joseph’s: The Pumas are still looking for their victory of the season after falling 55-0 last weekend at Shepherd.  Saint Joseph’s has been outscored 135-20 through its first three games.  Four different players have thrown passes for the Pumas this season due to injury.  Mack Ogletree leads the Pumas with nine receptions, has thrown 11 passes, rushed 16 times, returned five kickoffs and a punt, and made a tackle.  Ronnell Tibbs leads the defense with 19 solo tackles, two fumble recoveries, and three pass breakups.

Historic Night Set for Communiversity Day: The Crusaders’ home opener against Saint Joseph’s (Ind.) on Saturday will mark the first night football game ever played on the Valparaiso University campus.  The game is also part of Communiversity Day at Valpo, which also includes a home volleyball match against Butler (at 4 p.m.), a tailgate complete with a barbeque dinner, and a fun-filled carnival atmosphere.  A fireworks display will cap the night’s activities.

Home Sweet Home: After two weeks on the road, the Crusaders open the home portion of the schedule against Saint Joseph’s.  Valpo is 48-39-2 (.551) all-time in home openers entering its 90th season of college football.  The Brown and Gold lost last year’s home opener 34-24 against Carthage after winning the first home game of the year in both 2007 and 2008.

Gokan Brings Them Down: After Cody Gokan registered a career-high 17 tackles, including 10 solo stops against Western Illinois in the season opener, he continued where he left off last week at Franklin.  Gokan registered 13 more stops to give him 30 on the season, just nine shy of his entire 2009 total.  Gokan leads the PFL and ranks second nationally averaging 15.0 tackles per game.

A Defensive Receiver: Eli Crawford continues to catch the football on the defensive side for the Crusaders.  The senior defensive back made two more interceptions on Saturday at Franklin, giving him 11 for his career.  He has had at least two in each of his four seasons, and the two picks last week both came deep in Grizzly territory.

Getting in the Backfield: Valparaiso registered 14 tackles for loss last week at Franklin and now have 18 in two games.  The 9.00 average per game is tied for seventh best in all of NCAA I-FCS with Brett Heber leading the way with three total stops behind the line of scrimmage.

This and That: After Valpo completed just one pass to a tight end all season in 2009, tight end Mike Gerton already has six grabs for a team-leading 83 yards this year ... Isaac Wildermuth leads Valpo with 45 yards rushing on 15 carries ... Valpo is averaging 22:44 in time of possession this year, including just 10:48 after halftime ... rising Chicago gospel and R&B singer Mechele Burtley will perform the national anthem on Saturday.