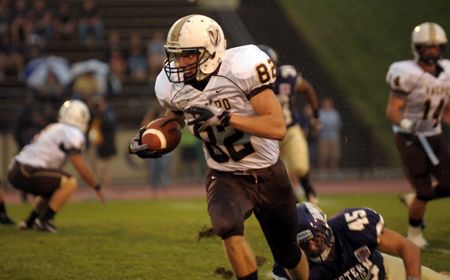 This Week in Crusader Football: It’s Homecoming at Valparaiso this Saturday as the Crusaders take to the gridiron against Drake at Brown Field.  Saturday also marks the start of the 18th Pioneer Football League campaign for the Brown and Gold as the Crusaders face the Bulldogs for the second straight year in the conference opener.

On the Air: For the sixth straight season the Valpo Sports Radio Network will be home to all 11 Crusader football games in 2010.  The Valpo Sports Radio Network consists of WAKE (1500-AM, Valparaiso) and WE-FM (95.9-FM, Michigan City).  Todd Ickow will handle all the play-by-play with Andy Viano adding the color commentary this week.  The game can also be heard live online at www.valpoathletics.com.  Live stats will also be available for the game through www.valpoathletics.com.

Head Coach Dale Carlson: Dale Carlson is 0-3 in his first season with the Crusaders and 110-106-3 overall entering his 22nd season as a collegiate head coach.  He arrived at Valpo from Ohio Dominican where he was 7-3 last season and 36-27 over six years.  Carlson began the Ohio Dominican program from scratch in 2004, just as he did at Tri-State University prior to his tenure with the Panthers.  He is now the 16th head coach in Valpo history, and just the seventh since 1946.

Series Notes: Valparaiso and Drake are meeting on Saturday for the 18th time in a series that dates back to 1993 when the Pioneer Football League was formed. The Bulldogs hold a 14-3 all-time advantage in the series, and have won the last six meetings between the two schools.  Last year Drake defeated the Crusaders 34-14 on October 3 in the Pioneer Football League opener for both schools.  Drake’s last appearance at Valpo came on November 22, 2008, a 32-0 win at Brown Field in the snow.

Wrapping Up Saint Joseph’s (Ind.): The Pumas scored 21 first quarter points last Saturday on the way to a 50-7 victory over Valpo to spoil the Crusaders home opener.  Mack Ogletree ran for three touchdowns and threw for another for Saint Joseph’s.  Ryan Lehr’s one-yard run accounted for Valpo’s lone score in the fourth quarter.  The Crusaders tallied a season-high 254 yards of total offense while surrendering 550 to the Pumas, including 474 on the ground.

Scouting Drake: The Bulldogs enter the PFL opener on the heels of a 48-21 setback at #22 Montana State last Saturday afternoon.  Drake has been led offensively by quarterback Michael Piatkowski, who has completed 46-of-78 passes for 510 yards and five touchdowns.  Pat Cashmore leads the ground attack with 21 carries for 103 yards while Steve Platek has 12 receptions for 83 yards.  Defensively, Ben Morrison has 23 tackles, including two for loss, and has both forced and recovered a fumble.

Huge Crowd Marks Home Opener: More than 4,600 fans poured into Brown Field last Saturday for the first night game in school history as well as Communiversity Day.  Despite the rain earlier in the day, the fans came out in full force for the pregame tailgate as well as to see the unveiling of the new Crusader mascot at halftime of the game.

PFL Opener Brings a Familiar Foe: Valpo is 5-12 all-time in PFL openers, and is looking for its first win in a league opener since 2006 when the Crusaders defeated Morehead State.  This is the eighth time in the 18 years of PFL play Valpo has opened conference action against Drake.

Carlson Taking Part in Coach to Cure MD Game: Head coach Dale Carlson will be among thousands of college coaches nationwide taking part in the third annual Coach to Cure MD program on Saturday as the Crusaders take on Drake.  American Football Coaches Association members will wear a Coach to Cure MD logo patch on the sidelines and college football fans are asked to donate to research projects supported by Parent Project Muscular Dystrophy.  Last year, more than 5,200 college coaches at 351 different institutions participated in the Coach to Cure MD event.

Well Behaved Men: Valparaiso was penalized just once in the home opener last week against Saint Joseph’s for five yards.  The lone penalty was a false start infraction that came midway through the fourth quarter.  The Crusaders rank second in the PFL averaging just 31.7 yards per game in penalties while the opponents have been flagged for an average of 86.3 yards per contest.

Finding the End Zone for the First Time: Ryan Lehr’s one-yard touchdown run last week against Saint Joseph’s (Ind.) was his first collegiate score.  Lehr, who did not appear in a varsity game last year, has three carries for 14 yards this season.

Lemon Steps In: Freshman Eric Lemon came in late in the first quarter last week against the Pumas and completed 22 of his 39 pass attempts for 184 yards.  He had a 47-yard completion to Sean McCarty as part of his efforts.

Getting in the Backfield: Valparaiso registered 23 total tackles for loss during non-conference action this year.  The 7.67 average per game is 14th best in all of NCAA I-FCS with Brett Heber leading the way with three total stops behind the line of scrimmage.