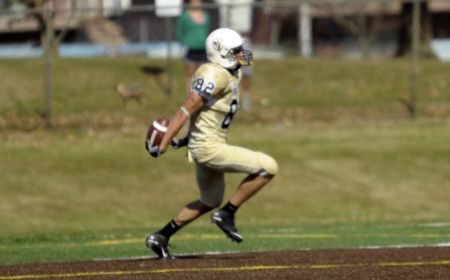 Eric Slenk (Holland, Mich./Christian H.S.) hauled in Valparaiso’s lone touchdown on Saturday afternoon as Jacksonville posted an 86-7 victory over of the Crusaders at Brown Field.

Slenk caught a 52-yard pass down the left sideline from Nate Goergen (Golden, Colo./Golden H.S.) with one second remaining in the opening quarter as the Crusaders cut the Dolphins lead to 28-7.

Jacksonville posted 38 second quarter points though, and took a 66-7 lead into the locker room.  The Dolphins returned two interceptions for touchdowns and blocked a punt for a score while Rudell Small rushed for three other touchdowns.

“You have to have confidence in yourself and that’s something we don’t seem to have right now,” head coach Dale Carlson said.

Adrian Gober (Gary, Ind./Merrillville H.S.) had two interceptions for the Crusaders on the afternoon, including one in the end zone to end a Jacksonville scoring threat.

Valpo managed just 195 yards of total offense, including 139 through the air.  Slenk had two grabs for 71 yards while Sean McCarty (Waukesha, Wis./West H.S.) had a team-high four grabs for 44 yards. Bobby Wysocki (Calumet City, Ill./Thornwood H.S.) led the ground game for the Crusaders with 15 carries for 36 yards.

“We need to do a better job up front,” Carlson added.  “Our quarterbacks are taking too many hits.”

Jacksonville (6-1, 4-0 PFL) tallied 658 yards of total offensive, including 338 through the air.  Josh McGregor completed 19-of-29 passes for 320 yards and three touchdowns while Small had 12 carries for 192 yards on the ground and his three scores.

“Jacksonville is a very good football team,” Carlson concluded.  “We knew it would be a tough game for us today.”

Valparaiso (0-7, 0-4) heads out on the road next Saturday to take on the Toreros of San Diego in California.  Kickoff is set for 4 p.m. CDT.