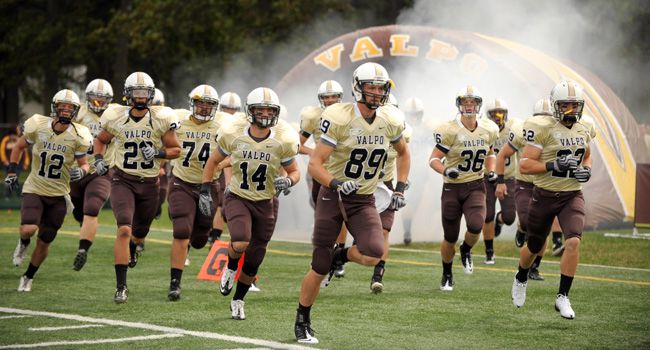 Valpo takes the field Saturday in San Diego to begin a stretch playing three of their last four games away from home. (Stacey LaCalamita)
Related Links

This Week in Crusader Football: Valparaiso takes the 2,100 mile trip across the country on Saturday afternoon to battle the Toreros of San Diego.  The Crusaders finish the season with three of their last four games away from Brown Field.

On the Air: For the sixth straight season the Valpo Sports Radio Network will be home to all 11 Crusader football games in 2010.  The Valpo Sports Radio Network consists of WAKE (1500-AM, Valparaiso) and WE-FM (95.9-FM, Michigan City).  Todd Ickow will handle all the play-by-play with Ryan Wronkowicz adding the color commentary this week.  The game can also be heard live online at www.valpoathletics.com.  Live stats will also be available for the game through www.valpoathletics.com.

Head Coach Dale Carlson: Dale Carlson is 0-7 in his first season with the Crusaders and 110-110-3 overall entering his 22nd season as a collegiate head coach.  He arrived at Valpo from Ohio Dominican where he was 7-3 last season and 36-27 over six years.  Carlson began the Ohio Dominican program from scratch in 2004, just as he did at Tri-State University prior to his tenure with the Panthers.  He is now the 16th head coach in Valpo history, and just the seventh since 1946.

Wrapping Up Jacksonville: The Dolphins raced out to a 66-7 halftime advantage before defeating the Crusaders 86-7 last Saturday afternoon at Brown Field.  Nate Goergen connected with Eric Slenk from 52 yards out for Valpo’s lone touchdown with one second remaining in the opening quarter.  The Crusaders were held to just 195 yards of total offense while Jacksonville rolled up 658 yards.  The Dolphins added two interception returns for touchdowns as well as a blocked punt for a touchdown.  Adrian Gober led the Crusader defense with two interceptions.

Scouting San Diego: The Toreros posted a 14-10 victory at Marist last Saturday afternoon to snap a two-game losing skid.  Godfrey Smith has 37 receptions for 574 yards on the year while Mason Mills has completed 106-of-158 passes for 1,047 yards and seven touchdowns.  On the ground, Phil Morelli leads the way with 279 yards and four scores.  Mario Kurn leads the San Diego defense with 39 total tackles, including 15.5 for loss.  He has 10.5 sacks, six quarterback hurries, four pass break-ups, and has forced two fumbles.  Fred Obi has added 36 tackles and three interceptions for the Toreros.

Gober Leads PFL in Interceptions: Adrian Gober intercepted a pair of passes last weekend against Jacksonville, and now has a Pioneer Football League-leading three picks this season.  One of his interceptions last weekend came in the end zone to end a Dolphin scoring threat.  The fifth-year senior did not have any career picks prior to this year, and joined the football team in 2008 after playing baseball to start his career at Valpo.

Wood Among Nation’s Top Punters: Greg Wood’s stellar season punting the football has the sophomore climbing the national rankings.  He enters this week ranked eighth in all of NCAA I-FCS averaging 42.8 yards per punt, which also leads the Pioneer Football League.  Wood has landed 10 of his 43 punts inside the opponents’ 20-yard line, and has had eight boots of 50 yards or more.

Wood Honored for Second Time: Greg Wood was honored by the College Football Performance Awards as an Honorable Mention Punter of the Week in NCAA I-FCS for the second time this season after his efforts at Jacksonville.  Wood averaged 45.4 yards per punt over nine kicks, landing a pair inside the Flyers’ 20-yard line.  He had a long of 54 yards last week.

Slenk Racks Up Return Yards: Eric Slenk piled up 220 yards worth of kickoff returns last week against Jacksonville, and now has 623 total for the season.  His 763 all-purpose yards rank fourth in the PFL this year.

McCarty Leads Receiving Corps: Sean McCarty has grabbed a team-leading 28 passes for 353 yards and a pair of touchdowns this season.  He hauled in a 58-yard touchdown pass from Nate Goergen against Dayton,  McCarty’s third reception of more than 30 yards already this season.  He caught a 31-yard pass at Franklin and had a 47-yard reception in the home opener against Saint Joseph’s (Ind.).

Check  Your Roster: Valparaiso has had 70 different Crusaders see action on the field this season, with only 26 players appearing in all seven contests thus far.  The starting lineup has been even more inconsistent, as 40 different players have drawn starting assignments, with just six Crusaders starting ever game.

This and That: Quarterback Nick Malantis threw for a career-high 61 yards off of the bench last week ... Erik Bradley made his collegiate debut at running back against the Dolphins, carrying 10 times for 20 yards ... Cody Gokan led the Crusader defense with seven tackles and now has 43 on the year.