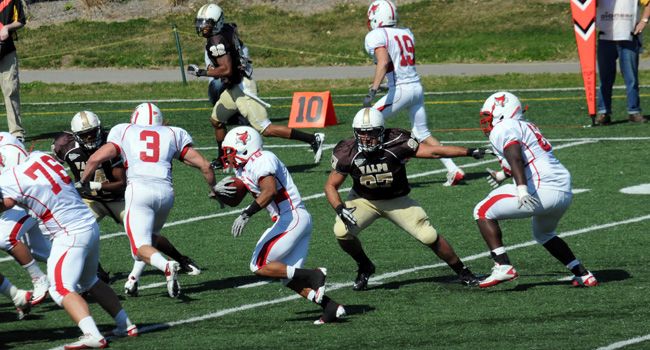 This Week in Crusader Football: Valparaiso enters the month of November by taking to the road on Saturday afternoon as the Crusaders travel to Buies Creek, N.C. to take on the Camels of Campbell.  The Brown and Gold finish the 2010 season with a pair of road games.

On the Air: For the sixth straight season the Valpo Sports Radio Network will be home to all 11 Crusader football games in 2010.  The Valpo Sports Radio Network consists of WAKE (1500-AM, Valparaiso) and WE-FM (95.9-FM, Michigan City).  Todd Ickow will handle all the play-by-play with Ryan Wronkowicz adding the color commentary this week.  The game can also be heard live online at www.valpoathletics.com.  Live stats will also be available for the game through www.valpoathletics.com.

Head Coach Dale Carlson: Dale Carlson is 0-9 in his first season with the Crusaders and 110-112-3 overall entering his 22nd season as a collegiate head coach.  He arrived at Valpo from Ohio Dominican where he was 7-3 last season and 36-27 over six years.  Carlson began the Ohio Dominican program from scratch in 2004, just as he did at Tri-State University prior to his tenure with the Panthers.  He is now the 16th head coach in Valpo history, and just the seventh since 1946.

Series Notes: Valpo and Campbell have met just twice, beginning in 2008 when the Camels reintroduced collegiate football on their campus.  The Crusaders won the first meeting, 47-14 on November 15, 2008 in Buies Creek, N.C. while the Camels posted a win at Brown Field on November 14 of last season 17-3.

Wrapping Up Butler: The Bulldogs took advantage of a pair of Crusader fumbles in the first half, building a 34-0 lead at halftime on the way to a 48-0 win at Brown Field last Saturday.  Andrew Huck threw touchdowns for the Bulldogs as Butler tallied 483 total yards on the day, including 262 on the ground.  Valpo managed just 188 yards of total offense and turned the ball over three times.  Bobby Wysocki completed 9-of-11 passes while also rushing 18 times for 41 yards.

Scouting Campbell: The Camels enter Saturday’s game looking to snap a three-game losing skid after falling 42-14 to Marist at home last weekend.  Both of Campbell’s victories this year have come away from home.  Quarterback Daniel Polk has thrown for 1,030 yards while rushing for 387 yards and eight scores.  Rashaun Brown has rushed 75 times for a team-leading 431 yards while Harrison Jordan has caught 22 passes for 250 yards.  Milton Brown leads the Camels defense with 67 tackles while Lee Stanley has made 58 stops.  Campbell’s offensive line leads the PFL, allowing just eight sacks on the year while the Camels lead the conference in third down conversions at 51.3%.

A Well-Behaved Team: Valpo leads the PFL averaging just 27.7 penalty yards per game.  The Crusaders have been flagged just 31 times total this season (3.4 per game) while the opposition has been penalized 64 times.  Valpo’s opponents have been flagged the second most in the league, with the Crusaders taking advantage of 60.2 yards of penalties per contest.

Wood Ninth in the Nation: Greg Wood’s strong punting effort continues.  The sophomore ranks ninth in the nation in punting, and still leads the PFL, averaging 42.9 yards per kick.  He is on pace to set a school record for season punting average which is currently 42.1 set by Roy Carlson in 1953.  Wood has landed 13 of his 53 punts inside the opponents’ 20-yard line, and has had 10 boots of 50 yards or more.

Who’s Throwing the Football: Last week Bobby Wysocki became the fifth different quarterback the Crusaders have used this year.  He completed 9-of-11 passes for 77 yards, while Nick Malantis also threw seven times against Butler.  Nate Goergen, Eric Lemon, and Matt Upshaw have all lined up under center this year.

Spoiled by Warm Weather:  Every game this season with the exception of Drake has seen the temperature reach at least 60 degrees at kickoff.  Drake was still a comfortable 56 degrees.  Saturday’s high in Buies Creek is calling for temperatures in the upper 50s as well.

Wood Honored Twice: Greg Wood was honored by the College Football Performance Awards as an Honorable Mention Punter of the Week in NCAA I-FCS following his games against both Dayton and Jacksonville.

Check Your Roster: Valparaiso has had 72 different Crusaders see action on the field this season, with only 27 players appearing in all nine contests thus far.  The starting lineup has been even more inconsistent, as 41 different players have drawn starting assignments, with just six Crusaders (Nate Blair, Grant Bushong, Adrian Gober, Sean McCarty, Alex Soller, and Ferdinand Velez) starting ever game.

This and That: Adrian Gober is tied for second in the PFL with three interceptions on the season ... Eric Slenk is fourth in all-purpose yards with 1,034 total, averaging 114.9 per game ... Cody Gokan has a team-leading 58 tackles, one more than Gober ... Brian Plachinski now has seven tackles for loss, including 4.5 quarterback sacks.