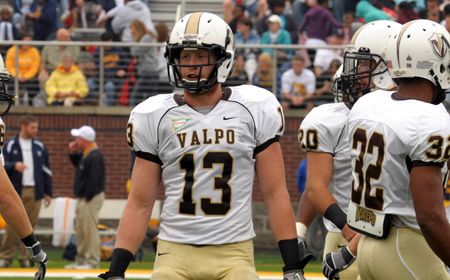 Valparaiso saw its 2010 season come to a close on Saturday afternoon as the Crusaders suffered a 37-15 loss to Morehead State at Jayne Stadium in Morehead, Ky.

Valpo’s defense came up big in the first half, forcing three Morehead State fumbles, keeping the Crusaders in the game.  The Crusaders recovered two of the loose balls inside of the Eagles’ 40-yard line, but could not move the football into scoring position.

“We challenged the team before the game,” head coach Dale Carlson said.  “We told them we had to protect the football and force turnovers.  We forced some turnovers in the first half, however we gave the ball back to them and couldn’t move it as well.”

Morehead State found the scoreboard with 5:57 to play in the first quarter as Rainer Duzan made a 26-yard field goal, the only scoring in the opening period.

Valpo’s offense was not able to pick up a first down in the opening quarter though, finishing the quarter with negative six yards of total offense.

The Eagles added to the lead with 8:47 to play before halftime as Desmond Cox scored on an eight-yard touchdown run off of left tackle.  Zach Lewis added a one-yard run with just 27 seconds  to play before intermission, giving Morehead State a 17-0 lead at the half.

The Eagles marched down field and scored on its first drive of the second half to extend the lead to 24 points on a Cox two-yard touchdown run.

Eli Crawford (Bogart, Ga./North Oconee H.S.) made another big play for the Crusader defense with 10:02 remaining in the third, intercepting a pass and returning it 45 yards for touchdown.

The Eagles closed the scoring on fourth-and-one with 1:51 to play in the game as Evan Sawyer found Brennan Sargent from 14 yards out for a touchdown.

Lemon finished the game with 16 completions in 31 attempts for 145 yards.

Cox finished the game with 19 carries for 124 yards and two scores while Lewis completed 29 of 41 passes for 317 yards for the Eagles.

“It’s going to take some work,” Carlson concluded.  “Anything good in life takes work, but we’re going to turn this thing around.”

Game Notes: Greg Wood (Libertyville, Ill./Libertyville H.S.) had a career-long 71 yard punt and averaged 48.1 yards per kick in nine attempts … Wood finished the season with a PFL and school record 43.6 yards per punt average on the season … Crawford finished his career with 12 interceptions, including three for touchdowns … Morehead State leads the all-time series 13-3.