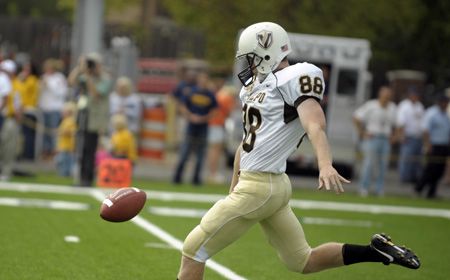 Wood, a sophomore punter, set a new school and PFL record averaging 43.6 yards per punt this year.  He landed 17 of his 67 kicks inside the opponent’s 20 yard line and booted 14 for 50 yards or more.  Wood had a career-long 71-yard punt in the season finale at Morehead State.

McCarty, a redshirt-junior wide receiver, led the Crusaders with 43 receptions for 526 yards on the season.  He hauled in three touchdown tosses.  Blair and Velez both started all 11 games on the offensive line.  Blair, a junior left tackle, earned his second straight Honorable Mention All-PFL honor.  Velez, a junior center, also served as the team’s long snapper on special teams.

Gokan, a redshirt-sophomore linebacker, finished second on the team with 69 tackles in just nine games.  He had three tackles for loss, including a quarterback sack, recovered a fumble, and broke up a pass.  Gober, a fifth-year senior defensive back, closed his career with 64 tackles, including three behind the line of scrimmage.  He shared the team lead with three interceptions, broke up five other passes, and recovered a fumble.