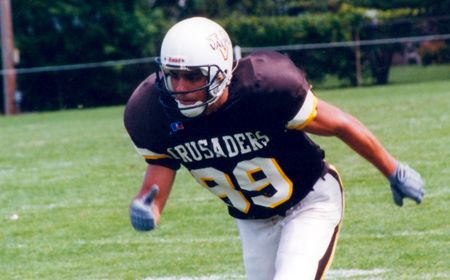 An outstanding player for the Crusaders on the football field, Rob Giancola set numerous receiving records during his time at Valparaiso, and, on Saturday, February 19 he will be inducted into the Valparaiso University Athletics Hall of Fame.

Both a Second and Third Team All-American in 2003, Giancola helped the Crusaders to the Pioneer Football League title that same season.

A Walter Payton Award finalist, Giancola finished his career at Valpo with 3,804 yards receiving, nearly 600 more than any other player in school history, as well as a school-best 40 touchdowns and 242 career points.