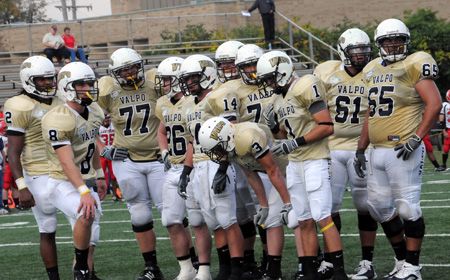 Football tickets are now on sale for the 2010 season. (Ray Acevedo)

Valparaiso University director of athletics Mark LaBarbera has announced ticket prices for the upcoming football season, including advanced ticket specials for the home opener against Saint Joseph’s (Ind.) as part of Communiversity Day on September 18.

Single game tickets throughout the season are $10, with all seats at Brown Field available as general admission.  Children ages 10 and under are admitted free of charge to all Crusader football games.

Specials are available for the opener against Saint Joseph’s on September 18, which will kickoff under the lights for the first time in school history at 7 p.m., if ordered by September 17.  In addition to admission to the football game, fans can utilize the same ticket for the Crusader volleyball match against Butler which will be held on that same day beginning at 4 p.m. at the Athletics-RecreationCenter.

A family package, which includes four tickets to both the volleyball match against Butler as well as the football game against the Pumas, and four food tickets, is available for just $30.  Individual game tickets bought in advance are just $5, and include admission to both games as well.  Faculty, staff, and Valparaiso University students are admitted free of charge to all Crusader home sporting events with valid ID.  Individual advanced food tickets are just $5 for everyone.

Tickets can be purchased in person at the Valparaiso University athletic ticket office, located in the Athletics-Recreation Center, or by phone at (219) 464-5233 or (877) MY-VU-TIX.  Ticket office hours are Monday-Friday, 10 a.m.-4 p.m.