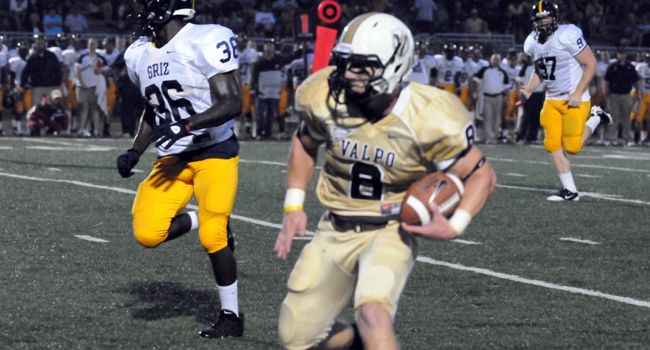 Valparaiso opened up the road portion of the 2011 football schedule on Saturday afternoon at Stambaugh Stadium in Youngstown, Ohio dropping a 77-13 decision to Youngstown State.

Eric Hoffman (Manitowoc, Wis./Lincoln H.S.) scored his second rushing touchdown of the season from 11 yards out with 4:44 to play in the second quarter to put the Crusaders on the scoreboard.

Youngstown State (1-1) jumped out to a 35-0 lead after the opening quarter and held a 63-6 advantage at the break.

“I challenged our guys to step up and play with a higher level of intensity at halftime,” head coach Dale Carlson said.  “I think we did a little better job from that standpoint in the second half.  I am happy we responded and moved the ball a little bit.”

Adaris Bellamy, Jamaine Cook, and Jordan Thompson each had two rushing touchdowns for the Penguins while Kurt Hess completed 12-of-13 passes for 204 yards and two scores through the air.  Bellamy rushed 23 times for 181 yards.

Hoffman completed 14-of-30 passes for 112 yards while Nick Malantis (Alpharetta, Ga./Alpharetta H.S.) completed one pass to Dale Cook (Lake in the Hills, Ill./Jacobs H.S.) for 63 yards.  Cook also had seven carries for 39 yards.

“Cook got a chance today and he did some good things for us,” Carlson added.

Valparaiso (0-2) will remain on the road next Saturday afternoon traveling to Pittsburgh, Pa. to face Duquesne.  Kickoff is set for 11 a.m. CDT.