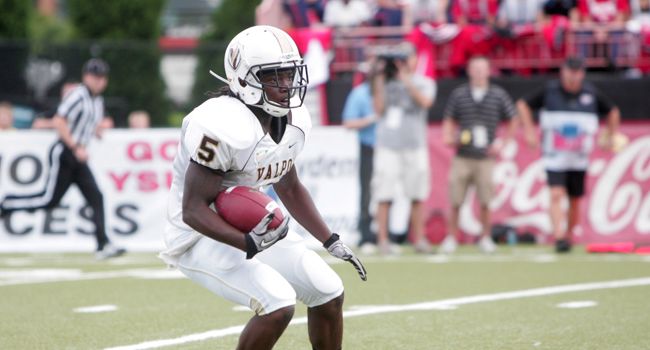 This Week in Crusader Football: Valparaiso wraps up the non-conference portion of the 2011 schedule on Saturday afternoon traveling to Pittsburgh, Pa. to battle Duquesne.  The Crusaders are also wrapping up a two-game road trip before returning to Brown Field in two weeks, following a bye next Saturday, to open Pioneer Football League action.

Head Coach Dale Carlson: Dale Carlson is 0-13 in his second season with the Crusaders and 110-116-3 overall entering his 23rd season as a collegiate head coach.  He arrived at Valpo from Ohio Dominican where he began the Ohio Dominican program from scratch in 2004, just as he did at Tri-State University prior to his tenure with the Panthers.  He is the 16th head coach in Valpo history, and just the seventh since 1946.

Series Notes: This marks the first meeting on the gridiron between the Crusaders and Dukes.  Valpo is 4-1-1 against current members of the Northeast Conference.  The Crusaders are 2-0 against Robert Morris (Pa.), 1-1 against Saint Francis (Pa.), and 1-0-1 against Wagner.  The last time the Brown and Gold faced a team in the NEC was Sept. 18, 2004, a 17-13 loss at Saint Francis.

Wrapping Up Youngstown State: The Penguins scored the game’s first 56 points on the way to a 63-6 halftime lead last Saturday in Youngstown, Ohio, and ultimately defeated the Crusaders 77-13.  Eric Hoffman and Bobby Wysocki both had touchdown runs to account for Valpo’s scoring.  Pat Derbak and Grant Bushong led the defense with nine tackles each.  Youngstown State outgained the Crusaders 657-291 on the afternoon, including 453-116 on the ground.

Scouting Duquesne: The Dukes are coming off of a 22-13 victory over Dayton last Saturday in Ohio and are playing their second straight Pioneer Football League team this week in the Crusaders.  Duquesne dropped its season opener 27-26 at Bucknell and will be hosting Valpo for their home opener this weekend.  Quarterback Sean Patterson has completed 56.7 percent of his passes this season for 442 yards and three touchdowns, with Isaac Spragg being his favorite target.  Spragg has 15 receptions for 193 yards on the year.  On the ground, Larry McCoy has carried 56 times for 225 yards.  Christopher Oliver leads the defense with 15 total tackles.

Finding the End Zone Again: Bobby Wysocki and Eric Hoffman both found the end zone for the second time this season last Saturday at Youngstown State.  Wysocki had a nine-yard scoring run while Hoffman scampered in from 11 yards out.  Both of their scores this year have been on the ground.  Hoffman has also thrown for a touchdown. Last season, only Sean McCarty had more than two touchdowns for the whole season, and he only had three.

Halfway There: Valpo is nearly halfway to the total offensive scoring output from the entire 2010 season in just two games.  The Crusaders tallied 100 total points one year ago and have already lit up the scoreboard for 48 this year.

Making the Big Play: Nick Malantis connected on his only pass attempt of the season last week at Youngstown State, firing a 63-yard completion to Dale Cook.  The catch was also Cook’s first collegiate grab.

Behaving Themselves: Despite playing in front of a large crowd of 14,117 last week at Youngstown State, the crowd did not intimidate the Crusaders.  The Brown and Gold committed just two penalties for 10 yards in the game, both on false starts.  Valpo did not commit any holding calls, nor did the team commit and defensive infractions.

Derbak Leading the Way Defensively: Sophomore Pat Derbak has registered nine tackles in each of the first two games to lead the Crusaders with 18 total stops on the year.  Last year Derbak recorded just 11 total tackles on the season as a rookie.

Passing Offense Among Nation’s Best: Valparaiso ranks 15th among all of Division I FCS schools averaging 284.5 yards per game through the air.  Eric Hoffman has completed 41-of-72 passes (56.9%) for 506 yards and a score while Nick Malantis is one-of-one for 63 yards.

Sharing the Ball: Twelve different receivers have made at least one catch this season for the Crusaders, with 11 of the 12 making multiple receptions.  Tim Bennett and Mike Gerton lead the way with six grabs each while Sean McCarty has a team-leading 90 receiving yards.

Racking Up the Offense: Valpo tallied 463 yards of total offense in the season opener against Franklin last Saturday.  It marked the Crusaders’ highest offensive output since the Brown and Gold rolled up 469 yards at Drake on Sept. 29, 2007.

Who’s Up Next?: Chris Smith and Adam Weinel continued to split the place kicking duties last week at Youngstown State as they did in the season opener, alternating point after touchdown attempts.  Smith, a senior, was true on all three of his attempts in the opener but had his lone chance blocked last week against the Penguins.  Weinel, a freshman, made both of his PAT tries in week one and converted again last week.  Weinel tried the lone field goal attempt of the year, but was wide left from 38 yards out against Franklin.

Pick Six: Alan Porter, Jr. wasted little time putting Valpo on the scoreboard in 2011, intercepting a Jonny West pass and returning it 61 yards for a touchdown just 1:57 into the game against Franklin.  For the junior it was his first career interception.  The interception return for a touchdown marked the second straight game Valpo registered a “pick six” as Eli Crawford returned an interception 45 yards for a score in the season finale last Nov. 13 at Morehead State.

Picking Up Where He Left Off: Greg Wood, a First Team All-Pioneer Football League punter one year ago, is averaging a solid 42.4 yard per kick average over his 17 punts this season.  The junior had a long of 63 yards against Franklin, and has already had four 50+ yard kicks on the season.  For his career Wood averages 43.4 yards per punt.  Wood has had at least one 50-yard punt in 11 of his 12 collegiate games.