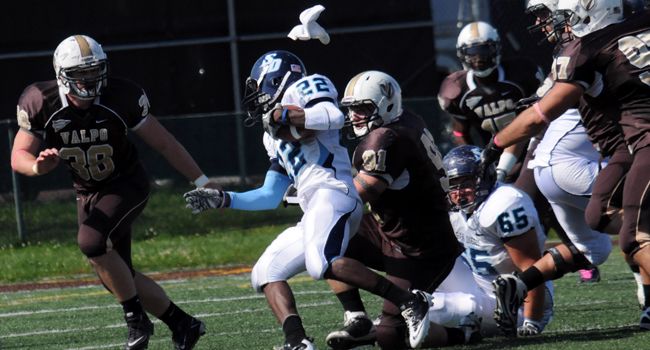 Touchdown drives on the first two possessions of the second half highlighted Valparaiso’s offense on Saturday afternoon but the Crusaders were not able to overcome a large halftime deficit in falling to San Diego 55-14 at Brown Field.

Gabe Ali-El (Randallstown, Md./Polytechnic Institute H.S.) had five catches out of the backfield for a career-high 118 yards, including a 75-yard touchdown reception, to lead the Valpo offensive attack.  He got behind the Torero defense and caught a pass from Eric Hoffman (Manitowoc, Wis./Lincoln H.S.) before racing down field to cut the Crusader deficit to 35-14 at the 9:25 mark of the third quarter.

“Ali-El did some good things for us on the field today,” head coach Dale Carlson said.  “He had a big reception which led to a score.”

Valpo had also scored on its first drive out of the locker room as Hoffman connected with Kelvin Smarwt (Saint Petersburg, Fla./Boca Ciega H.S.) from 23 yards out.  Hoffman had to scramble on the play but found Smarwt in the corner of the end zone for the team’s first score.

San Diego (5-1, 3-0 PFL) jumped on top quickly with the game’s first drive.  Kenny James went up the middle from four yards out for the first of three touchdown runs on the day.  He added scoring runs of 40 and 49 yards in the second and third quarters respectively and finished the day with 22 carries for 207 yards.

Mason Mills also added a pair of touchdown tosses to Sam Hoekstra, one in each half, while scrambling before running into the end zone for another first half score.  San Diego led 28-0 at intermission.

Nick Scudellari scored on a three-yard run following a Crusader interception late in the third quarter while Sam Scudellari caught a 15-yard pass from Bo Stompro for the game’s final score at the 11:18 mark of the fourth quarter.

Mills completed 18-of-27 passes for 233 yards to pace the Toreros as San Diego registered 603 total yards for the game.  Valpo finished the day with 307 yards of offense.

One bright spot for the Crusaders on the afternoon was punter Greg Wood (Libertyville, Ill./Libertyville H.S.).  He averaged 50.3 yards per punt on nine kicks, including a career-best 76-yarder to start the game.  He finished with four punts of 50 yards or more, including another 64-yarder.

“Greg had a great day punting the football,” Carlson concluded.  “He helped us out of some field position situations by turning the field around.”

Valparaiso (0-5, 0-2) will take to the road next Saturday afternoon, heading to Indianapolis, Ind. for the “Battle for the Hoosier Helmet” against longtime rival Butler.  Kickoff is set for 12 p.m. CDT.