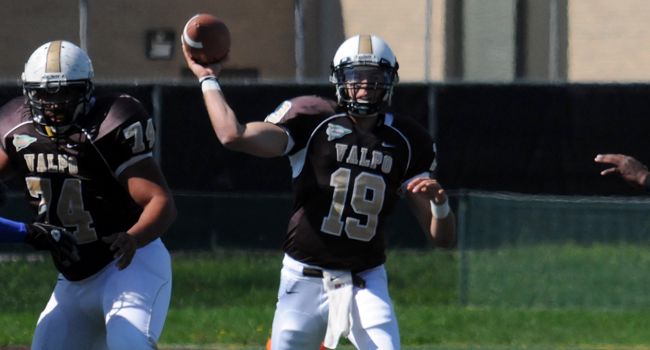 This Week in Crusader Football: Valparaiso continues its road trip this Saturday afternoon as the Crusaders head west to the state of Iowa to battle Drake.  The Crusaders are coming off of one of their best offensive outputs of the season last week at Butler, and look to continue putting up yardage this weekend.

Head Coach Dale Carlson: Dale Carlson is 0-17 in his second season with the Crusaders and 110-120-3 overall entering his 23rd season as a collegiate head coach.  He arrived at Valpo from Ohio Dominican where he began the Ohio Dominican program from scratch in 2004, just as he did at Tri-State University prior to his tenure with the Panthers.  He is the 16th head coach in Valpo history, and just the seventh since 1946.

Series Notes: Valparaiso and Drake are meeting for  the 19th time in a series that dates back to 1993 with the Bulldogs holding a 15-3 advantage all-time.  Drake has won seven straight meetings between the two schools, including a narrow 21-19 contest last season at Brown Field.

Wrapping Up Butler: Valpo hung close for the opening half last Saturday in Indianapolis, trailing just 14-7 at the break, but the Bulldogs took advantage of three Crusader turnovers in the second half on the way to a 42-14 win over the Brown and Gold.  Sterling Summerville posted career highs with 81 yards rushing and 77 yards receiving while scoring a touchdown on the ground and Mike Gerton caught a touchdown pass from Eric Hoffman for another score.  The Crusaders outgained Butler 463-400 for the game and ran 100 plays to the Bulldogs’ 51 on the day.

Scouting Drake: The Bulldogs had their five-game winning streak snapped last week at San Diego with a 31-24 setback.  Drake is a perfect 3-0 at Drake Stadium on the season.  Mike Piatkowski has thrown for 1,988 yards and 13 touchdowns this season, completing passes at a 66.5% rate.  Patrick Cashmore has rushed for 468 yards to lead the ground game while Nathan Paddock has 36 catches for 563 yards.  Tyler Moorehead leads Drake with 51 tackles on the season, including 9.5 for loss and has blocked a pair of kicks.  Brandon Coleman leads the Bulldogs with 11 tackles for loss, including 8.5 quarterback sacks.

Racking Up the Offense: Valpo tallied 463 yards of total offense last week against Butler, matching the Crusaders’ season high in yardage.  The Crusaders also put up 463 yards in the season opener against Franklin, marking the Crusaders’ highest offensive output since the Brown and Gold rolled up 469 yards at Drake on Sept. 29, 2007.

Summerville Has All-Around Big Day: Sterling Summerville stepped in and started at running back for the first time in his career last week against Butler and piled up a pair of career highs.  The transfer from Missouri carried the ball 26 times for 81 yards, including his first collegiate touchdown.  Summerville also made eight catches for a career-best 77 yards out of the backfield.

A Statistical Anomaly: Valpo ran twice as many offensive plays as Butler last week (100-51), outgained the Bulldogs in total offense (463-400), and nearly doubled the hosts in time of possession (38:32-21:28) yet came out on the short end on the scoreboard 42-14.  The Crusaders also committed just two turnovers and were 7-of-9 on fourth down conversions.  Unfortunately for Valpo, three turnovers led to 21 points and the Brown and Gold was stopped on a pair of fourth down tries in the red zone in the opening quarter.

Success on Fourth Down: After failing two convert a pair of fourth downs in the first quarter against  Butler, Valpo made good on its next seven attempts to finish the game 7-of-9.  The Crusaders are second in the PFL in fourth down conversion percentage, connecting on 14-of-21 (66.7%) for the year.

Derbak Continues to Lead the Defense: Pat Derbak continues to lead the Crusaders with 47 tackles on the season, ranking third in the Pioneer Football League with 7.8 stops per contest.  He has four tackles for loss included among his season totals.  Last week against Butler, Derbak made six tackles, one shy of the team high of seven recorded by Grant Bushong and Alan Porter, Jr.

Back-to-Back 100-Yard Receiving Games: After not having a 100-yard receiver for the first four weeks of the year, Valpo has had a different player tally at least 100 yards in receptions each of the last two weeks.  Two weeks ago against San Diego, Gabe Ali-El had 118 yards worth of grabs while Sean McCarty made 104 yards worth of catches last week at Butler.

Sharing the Wealth: On the season, 16 different Valpo players have caught at least one pass, with 13 of the 16 having at least two receptions on the year.

Passing Offense Among Nation’s Leaders: Valparaiso ranks 22nd among all NCAA I-FCS schools averaging 268.0 passing yards per game this season.  Crusader quarterbacks have completed 56.9 percent of their passes this season for 1,354 yards in five games.

A Strong Leg: Greg Wood, a First Team All-Pioneer Football League punter one year ago, is averaging 43.4 yards per kick over his 45 punts this season and ranks 10th among all NCAA I-FCS punters.  The junior had a long of 71 yards against San Diego, and has already has 10 50+ yard kicks on the season.  He has landed 11 kicks inside of the 20-yard line for the year.  For his career Wood averages 43.6 yards per punt.  Wood has had at least one 50-yard punt in 13 of his 15 collegiate games.

Behaving Themselves: Valpo leads the PFL averaging just 34.0 yards in penalties per contest.  The Crusaders have been whistled for infractions just 26 times (4.3 per game) this season for 204 total yards.  There is no other team in the PFL averaging less than 40 yards per game in miscues.  Valpo committed just two turnovers last week in the game against  Butler.

This and That: Tanner Kuramata made a career-high five receptions against Butler and leads Valpo with 23 catches on the year ... Eric Hoffman completed a career-best 33 passes against the Bulldogs, finishing 33-of-47 on the day.