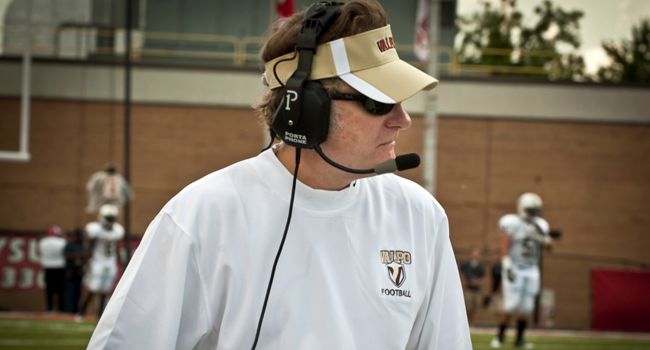 Coach Carlson was the feature of a piece on Sports Network. (Stacey LaCalamita)
Related Links

Valparaiso football coach Dale Carlson wishes more people could see his team during the week and not just on Saturdays.

He says with the way his players work during practices or attack their Tuesday morning regimens in the weight room, it doesn't reflect that Valparaiso is mired in the longest losing streak in the Football Championship Subdivision.

The Crusaders will take 25 straight losses, including an 0-5 record this season, when they visit Butler for a Pioneer Football League game on Saturday.

Carlson is in his second season guiding the Valpo program. In January 2010, he took over a team that beat only a Division III opponent in going 1-10 in '09. After going 0-11 last season, the Crusaders have yet to win under Carlson, who spent 21 seasons as a head coach below the Division I level, going 110-103-3 at Lakeland College, Taylor, Tri-State and Ohio Dominican

Amid regular blowout losses, Carlson has played young players, a decision which he hopes will pay off in the long run. There are 42 true freshmen (the PFL is non-scholarship, so freshman classes often are big), 12 redshirt sophomores and 10 true sophomores on this year's team.

While a fifth-year senior like safety Laurence Treadaway might be providing leadership as a captain, the future of the program is here now with starters like quarterback Eric Hoffman, a redshirt freshman, running back Gabe Ali-El, a true freshman, and outside linebacker Pat Derbak, a sophomore.

The Crusaders run a spread offense on offense and utilize multiple 3-4 alignments defensively. They have been outscored 268-90 this season.

In Five-a-Side - In the FCS Huddle's monthly feature of "five questions, five answers" with an influential person in the FCS - Carlson discusses how he and his assistant coaches are working toward turning around the Valpo program.

TSN: Obviously, your team is preparing for your game at Butler on Saturday. How have you and your staff been addressing your team's struggles?

DC: Things, I think, are moving along well. We'd like to have a little bit more success showing up on the win-loss side. But I knew when I took this job it was going to be a process to change the culture. I don't know if years of neglect is the right word, but we're trying to repair things that weren't being done right that created to a negative culture.

TSN: What are some of the shortcomings that you think you have solved?

DC: There were just issues in some of the funding. We're a Division I program and kids were buying their own shoes or buying their own practice gear. The weight training program was not being run through the strength and conditioning coach's office, so it wasn't being done the way it should be done. Those were probably two of the major things we had to attack right away.

The other part of it was recruiting, how athletes were being recruited, working the recruiting cycle in a proper way. Those things just weren't being done here in the past, and so, first of all, we had to take care of our own kids and make sure that they felt like they were valued members of the team by making sure that they had the things that they needed to go out to practice and to travel in and those things. And we had to attack recruiting the right way. It's a Division I school, it just wasn't being done properly. It wasn't funded properly, it wasn't being done properly. I think those were some big, major things that had to be turned around.

TSN: With the recruiting in mind, you've played a lot of true and redshirt freshmen the last two seasons. What's gone into that decision?

DC: It was one of the things that at the end of last year we just felt like we had to kind of remake our roster a little bit. So we made a conscious decision. We had some players kind of figure out that they weren't in the mix and chose not to come back. We had some players that we asked not to come back. And so in essence we pretty much brought in close to as many new players for this season as we had returning players. You know, that was by design because you want to change the culture and you want to give kids a chance and an opportunity, but I felt like if you didn't want to buy into what I was asking you to do ...

And I wasn't asking a lot of really tough things, it was go to class, be productive, be a productive representative of our program in the classroom, make good decisions off the football field, be on time and work hard in the weight room or conditioning or at practice, doing the things that you're supposed to be doing. And if you didn't want to do those things, then we don't need you in the program. And there were some guys that just didn't want to do those things. So we made a conscious effort to go out and to try and recruit kids who were going to buy in and do the things that we felt they needed to do. As we progress this year, some of the younger players have earned an opportunity to get on the field, so we've been playing them.

TSN: Does the losing streak hang over your players?

DC: I don't know because I can't look into their heads completely. Our main focus is what are we gonna do today to get better for tomorrow and that you can't worry about the past. Now that being said, last season we saw as games went on and maybe mistakes were made, it was, 'Here we go again.' I haven't seen that attitude in them so far this year, so I feel like we're making progress in that vain. I think part of it is because half the team wasn't here last year and our young guys are always enthusiastic no matter what the score is. They're encouraging people on the sidelines and continuing to work and play hard.

TSN: When you get your first win, how do you think you will you celebrate it?

DC: You want to get that first win and you want to enjoy it. It's hard to say how I'm going to celebrate it. I mean, I've been a head coach now for 23 years. I probably want it more for the kids than I want it for myself because for me as a coach, win, lose or draw, there's always another week. So my focus is always going to the next week. For our players, I am going to be ecstatic and really be happy for them. For our new players to experience their first college win and for the guys that have stuck with the program over the last few years to get back to what it feels like to win a game, I'm just going to be excited for them. And I'm a coach, I'm sure 45, 50 minutes later, I'm going to be looking for next week.