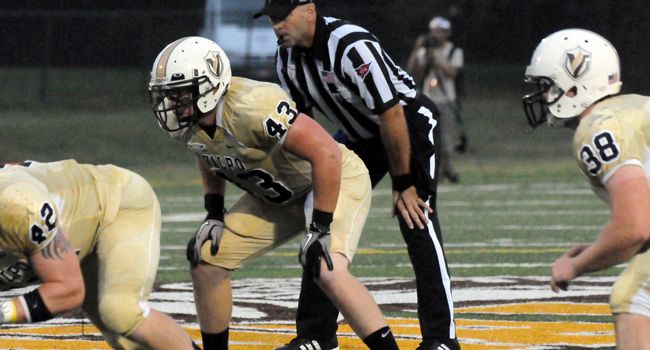 Valparaiso wrapped up its two-game road trip at Drake Stadium on Saturday afternoon, falling 50-0 to Drake in Des Moines, Iowa.

The Crusaders managed just 125 yards of offense on the afternoon and struggled to pick up first downs, converting just 2-of-15 third down attempts.

“Drake plays with a lot of discipline,” head coach Dale Carlson said after the game.  “We played with a lack of discipline today and dropped a lot of passes.  We just did not make the plays we needed to.”

Drake took control early, scoring on its first five drives of the game.  Mike Piatkowski completed 16-of-22 passes for 214 yards and four touchdowns all in the first half, with all four scores going to different receivers.

Turnovers hurt the Crusaders as miscues on three straight offensive plays led to 21 Drake points, including a 65-yard interception return for a touchdown by Jake Underwood.  Drake added a pair of points on a safety as Valpo snapped the ball out of the end zone on a punt attempt and the Bulldogs took a 44-0 lead into the locker room.

“The interception that was returned for a touchdown was a back-breaker,” Carlson added.

Valpo managed just 45 yards of total offensive during the opening 45 minutes while surrendering 283 yards to Drake.

Jacob Schmudlach added a one-yard touchdown run in the final minute of the third quarter for the only score of the second half.

“We challenged the guys to come out and play hard in the second half and for the most part we did,” Carlson concluded.  “We just have got to get some consistency at quarterback and it was just not there today.”

Trey Morse rushed 17 times for 60 yards and a touchdown for Drake (6-2, 4-1 PFL) while Jacob Dines led all Bulldogs receivers with four catches for 41 yards.

Valparaiso (0-7, 0-4) will return home to Brown Field next Saturday afternoon as the Crusaders host Dayton.  Kickoff is set for 1 p.m.