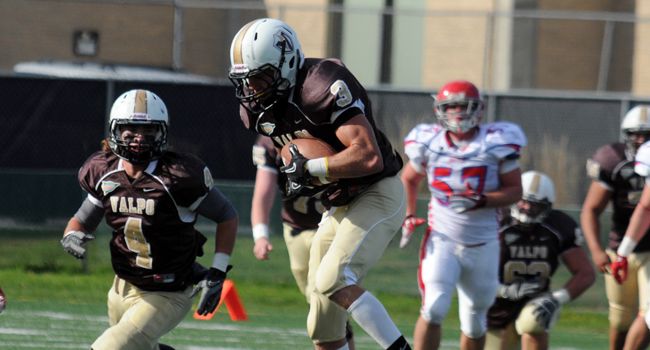 Valparaiso’s offense was unable to get on track until late in the game on Saturday afternoon at Brown Field as Dayton defeated the Crusaders 49-10.

Ben Lehman (Elgin, Ill./Saint Edward Central Catholic H.S.) connected with Tony Taibi (Arlington Heights, Ill./Rolling Meadows H.S.) deep down the left sideline with 1:11 to play in the game for a 41-yard touchdown pass, marking the first touchdowns both of their careers.

“It was good to see Lehman get the touchdown pass at the end,” head coach Dale Carlson said after the game.  “We have some good young receivers and Taibi got a chance to show what he could do.”

Unfortunately for the Crusaders, three Flyer touchdowns in a span of 1:06 between the second and third quarters proved too much to overcome.

Leading just 14-3 with under a minute to play in the first half, Dayton got a five-yard touchdown run from Will Bardo.  Valpo threw an interception just before the break and Bardo connected with Branden Johnson from 44 yards out with just 19 seconds remaining before intermission to give the Flyers a 28-3 lead at the break.

Gary Hunter returned the second half kickoff 88 yards for a score and the Flyers built a 32-point advantage.

“That kickoff return to start the second half was a big momentum shift,” Carlson added.

Dayton scored first on a two-yard run by Taylor Harris on the Flyers’ opening drive before Valpo’s defense stiffened.  The Flyers added a touchdown at the 7:46 mark of the second quarter on a 55-yard pass from Bardo to Jordan Boykin before the Crusaders cut into the deficit.

Adam Weinel (Fort Thomas, Ky./Highlands H.S.) kicked his first collegiate touchdown, a 31-yarder, with 3:24 to play in the half and pulled the Brown and Gold within 11 before the Flyers went on their run.

“I thought our defense was playing well early,” Carlson said.  “We need both sides to play well and contribute and the offense was not doing it.”

Valpo finished the game with 254 total yards with Eric Hoffman (Manitowoc, Wis./Lincoln H.S.) completing 14-of 25 passes for 118 yards and rushing for another 39.

“We gave up some big plays today and it hurt us,” Carlson concluded.  “We’re still inconsistent.  We play well for a few series and then give up a big play.”

Valparaiso (0-8, 0-5) returns to the road next Saturday afternoon, traveling to Poughkeepsie, N.Y. to battle Marist.  Kickoff is set for 11 a.m. CDT.