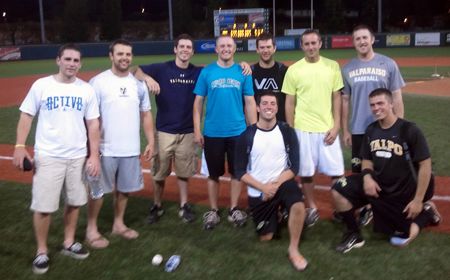 This Week in Crusader Football: The home portion of the 2011 football schedule comes to a close on Saturday afternoon as the Valparaiso Crusaders entertain the Campbell Camels.  The 17 members of Valpo’s senior class will all be honored prior to kickoff.

On the Air: For the seventh straight season the Valpo Sports Radio Network will be home to all 11 Crusader football games in 2010.  The Valpo Sports Radio Network consists of WAKE (1500-AM, Valparaiso), which will carry every game all season long along with WJOB (1230-AM, Hammond), which will carry select games.  Todd Ickow will handle all the play-by-play with Keaton Gillogly adding the color commentary this week.  The game can also be heard live online at valpoathletics.com.  This week’s game can also be viewed online through valpoathletics.com as part of the Horizon League Network.  Live stats will also be available for the game through valpoathletics.com.

Head Coach Dale Carlson: Dale Carlson is 0-20 in his second season with the Crusaders and 110-123-3 overall entering his 23rd season as a collegiate head coach.  He arrived at Valpo from Ohio Dominican where he began the Ohio Dominican program from scratch in 2004, just as he did at Tri-State University prior to his tenure with the Panthers.  He is the 16th head coach in Valpo history, and just the seventh since 1946.

Series Notes: Valparaiso and Campbell are meeting for the fourth straight season since the Camels resurrected their football program prior to the 2008 season.  Campbell has won two of the three previous meetings, including a 56-14 win in Buies Creek, N.C. last season.  The Camels also won the lone meeting at Brown Field, 17-3, in 2009.  Valpo’s only victory against Campbell was a 47-14 triumph on the road back on Nov. 15, 2008.

Wrapping Up Dayton: Valparaiso hung with Marist for most of the first half, trailing just 10-7 heading into the final minutes before halftime, but five turnovers eventually proved to be too much for the Crusaders to overcome last Saturday afternoon in a 30-7 loss to the Red Foxes.  Eric Hoffman connected with Cole Anderson from five yards out in the first quarter for the lone Crusader touchdown on the afternoon.  Valpo tallied 183 yards of offense during the game while the Red Foxes registered 372 for the afternoon.

Scouting Campbell: The Camels have won five straight games entering this weekend following a 41-31 triumph against Morehead State last Saturday afternoon at home.  Quarterback Braden Smith has thrown for 1,582 yards and 13 touchdowns, with three different receivers registering nearly 400 yards each in catches.  Carl Smith leads the ground attack with 130 carries for 542 yards while Jordan Cramer has 11 rushing touchdowns.  Defensively, Chris Price leads the team with 55 tackles while Jeremiah Robinson has 14.5 tackles for loss.

Treadaway Knocks the Ball Free: Laurence Treadaway forced his third fumble of the season at Marist on Saturday, a loose ball that was recovered by Cody Gokan in the second quarter.  The turnover gave the Crusaders the opportunity to tie the game late in the half, but a fumble by Valpo ended the threat. Treadaway also jarred the ball loose at Youngstown State and at Duquesne as well, and has now forced four total fumbles during his career.

Gokan Also Involved in Takeaways: Cody Gokan pounced on the loose football that Laurence Treadaway forced on Saturday for his second career fumble recovery.  He then added to his takeaway total in the second half, intercepting a pass for his first career pick.

Gadson Has Career Day as Well: Devan Gadson made the most of his first collegiate start last Saturday at Marist.  The freshman defensive back registered a career high with seven tackles, including a pair of solo stops.

Anderson Hauls in Second Career Scoring Grab: Cole Anderson’s five-yard touchdown reception for Valpo’s lone points against the Red Foxes marked his second collegiate score.  The freshman went high into the air to haul the ball in and made sure to get a foot down inbounds along the back of the end zone.

Hoffman Continues to Throw TDs: Eric Hoffman’s touchdown pass to Cole Anderson was his seventh of the season.  The redshirt-freshman has thrown the most touchdown passes by a Crusader in a season since Warren Arnold threw for 13 scores in 2007.

Derbak Continues to Lead the Defense: Pat Derbak continues to lead the Crusaders with 73 tackles on the season, ranking third in the Pioneer Football League with 8.1 stops per contest.  He has 6.5 tackles for loss included among his season totals.  He also has broken up a pair of passes and intercepted another on the year.

Getting in the Backfield: Valpo has pushed back into the opponents’ backfields the last two weeks.  After recording just 22 total tackles for loss over the first six games of the season, the Crusaders have recorded 24 stops behind the line of scrimmage over the past three weeks, including seven last week against Marist.

Weinel Perfect on the Season: Adam Weinel is still perfect on point after touchdown attempts this season.  The freshman has made all 12 of his attempts following Crusader scores and has been the go-to kicker for Valpo after sharing the job earlier in the season.

Smarwt Among All-Purpose Leaders: Kelvin Smarwt ranks 49th among all FCS players averaging 121.4 all-purpose yards per game this season.  Smarwt has picked up 20 yards rushing, 110 receiving, 18 via punt return, and 945 from kickoff returns this season, and has nearly reached 1,100 yards for the season.  He enters this weekend at 1,093 all-purpose yards for the year.

Sharing the Wealth: Kent Warren became the 18th different Valpo player to have caught at least one pass this season with his first collegiate reception last week at Dayton.  A total of 14 of the 18 players have at least two receptions on the year.

A Strong Leg: Greg Wood, a First Team All-Pioneer Football League punter one year ago, is averaging 42.62 yards per kick over his 64 punts this season and ranks ninth among all NCAA I-FCS punters.  The junior had a long of 76 yards against San Diego, and has already has 14 50+ yard kicks on the season.  He has landed 15 kicks inside of the 20-yard line for the year.  For his career Wood averages 43.1yards per punt.  Wood has had at least one 50-yard punt in 16 of his 18 collegiate games.

Racking Up the Offense: Valpo tallied 463 yards of total offense against Butler on Oct. 15, matching the Crusaders’ season high in yardage.  The Crusaders also put up 463 yards in the season opener against Franklin, marking the Crusaders’ highest offensive output since the Brown and Gold rolled up 469 yards at Drake on Sept. 29, 2007.

This and That: The 30 points allowed by Valpo last Saturday marked a season low ... Devan Gadson returned his first career  kickoffs last weekend ... Nikko Carson and Jalen Johnson each had 1.5 tackles for loss against Marist.