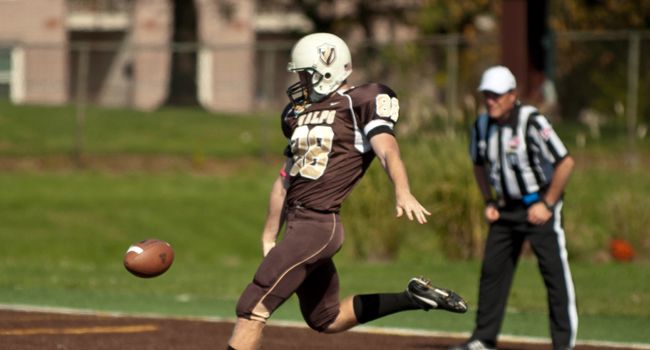 Both individuals earned College Football Performance Awards Honorable Mention Performers of the Week at quarterback and punter respectively for Division I-FCS.  Hoffman was also named The Sports Network/Fathead.com FCS co-National Freshman of the Week for his efforts.

Hoffman, who was also named the Pioneer Football League’s Co-Offensive Player of the Week, completed 30-of-40 passes for 314 yards and a career-high four scores as the Brown and Gold snapped a 29-game losing skid.  He was 7-of-8 in the fourth quarter for 81 yards and two scores, the last of which proved to be the game winner with 3:09 to play.

Hoffman’s touchdown tosses were 14, three, 14, and nine yards, and each one either gave Valpo the lead or extended the Crusader advantage.

Wood punted three times on Saturday for a 46.7-yard per kick average.  He had a long of 58 yards and landed one of his three punts at the Campbell one-yard line.

Valparaiso will close out the 2011 regular season on Saturday afternoon against Davidson.  Kickoff is set for 12 p.m. CST in Davidson, N.C.