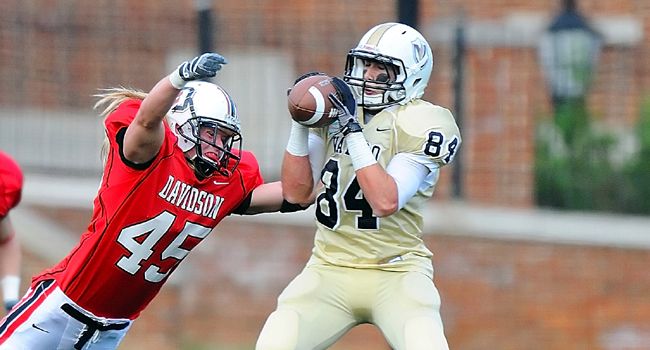 The 2011 football season came to a close on Saturday afternoon for the Valparaiso Crusaders as the Brown and Gold fell to Davidson 30-22 at Richardson Stadium in Davidson, N.C.

The Crusaders led 14-10 late in the first half, but a Wildcat touchdown before halftime started a 20-0 run for the hosts and Valpo was unable to recover.  Valpo scored late but an onside kick attempt was recovered by Davidson with under two minutes to play.

“We just were out of synch offensively a bit today,” head coach Dale Carlson said.  “We weren’t getting the five, six, and seven yard plays that you need to sustain drives.  That’s the biggest difference from last week.”

The Crusader defense responded early in the second quarter as Jalen Johnson (Columbus, Ohio/Dublin Scioto H.S.) got pressure on Carkhuff, forcing him to throw the ball away.  Bruce Collins (Chicago, Ill./Rich East H.S.) stepped in and intercepted the pass, his first of his career, and returned it 74 yards for a touchdown, tying the game at seven at the 12:12 mark.

“What a great play that was,” Carlson said.  Jalen Johnson put great pressure on the quarterback and Bruce got his dream running it back.”

The Wildcats retook the lead 10-7 with a 15-play drive, capped by a Chazzo Habliston 19-yard field goal.  Again the defense stepped up as Davidson had the ball first-and-goal at the six, but Valpo kept them out of the end zone.

Valpo’s offense gave the Crusaders the lead on the next drive.  Eric Hoffman (Manitowoc, Wis./Lincoln H.S.) connected with Tanner Kuramata (Rancho Cucamonga, Calif./Claremont H.S.) for 41 yards, moving the ball into the red zone.  Two plays later, Hoffman found Tim Bennett (Joliet, Ill./Joliet Catholic H.S.) in the back of the end zone and the Crusaders had a 14-10 advantage.

Davidson retook the lead just before halftime as Carkhuff and Funsten hooked up for their second score, this one from six yards out and the Wildcats had a 16-14 halftime advantage.

A three-and-out by the Crusaders to start the third gave Davidson good field position and the Wildcats took just three plays to add to the lead.  Carkhuff scored on a quarterback keeper from a yard out to make it a nine-point advantage.

The lead grew to 30-14 when Chase Culberton scored from four yards out with less than a minute to play in the third quarter.

Valpo moved deep into Davidson territory on the first drive of fourth quarter before an interception in the end zone ended the 16-play drive without points.  The Crusaders continued to battle though, and scored with 1:55 to play when Hoffman lobbed the ball over a defender to Cole Anderson (Highlands Ranch, Colo./Valor Christian H.S.) from 10 yards out.  Hoffman then found Kuramata on the two-point conversion attempt to pull the Crusaders within eight.

Davidson recovered the onside kick attempt though, and was able to run the clock out.

Hoffman finished the game 33-of-57 for 364 yards and the two touchdowns.  Kuramata had six receptions for 107 yards, a career-high in both categories.  Valpo finished the game with 346 yards of total offense though, as the Crusaders could not establish the running game.

“Hoffman played better late in the year than he did early on,” Carlson commented.  “He did some good things and made progress.  We’ll continue to have competition at that position throughout the offseason though.”

Carkhuff finished 34-of-55 for 371 yards for Davidson, with Funsten making 13 grabs for 175 yards and Jonathan Adams adding 12 catches for 122 yards.  The Wildcats finished with 463 total yards.

“We knew he’d (Carkhuff) get his catches and yards,” Carlson added.  “Early on our defense was out there for a lot of snaps.  We were a bit gassed on their scores with our offense not producing.  We were inside the 30 several times and came away with no points.”

“We didn’t win enough games,” Carlson concluded.  “We had some opportunities but did finish.  Our competitive level was so much better this year though.  Those are things to build on and what we will do so heading into the offseason.”

Game Notes: Davidson leads the all-time series 6-1 … Colin Burke (Orlando, Fla./Freedom H .S.) added an interception as Valpo picked off three passes on the day … the Crusaders broke up five passes defensively … Valpo was whistled for a season-high 13 penalties for 114 yards and were just 5-of-19 on third downs.