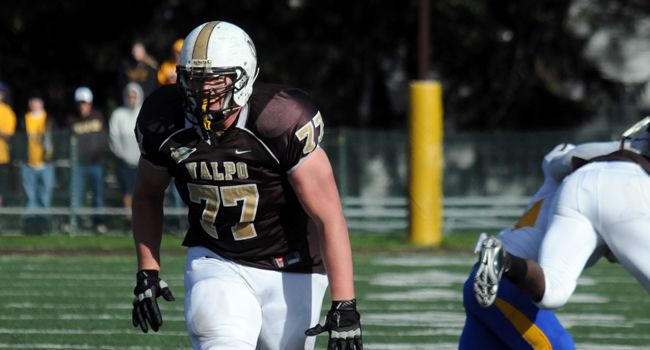 Nate Blair is a member of the ADA Academic All-Star Team. (Ray Acevedo)

Blair started all 11 games this season at left tackle for the Crusaders, while starting all 33 contests over his final three seasons.  He is also a three-time Honorable Mention All-Pioneer Football League selection, anchoring the Valpo offensive line.

Earlier this season Blair was also named to the Capital One Academic All-District V Football Team as selected by the College Sports Information Directors of America (CoSIDA) to recognize the nation’s top student-athletes for their combined performances athletically and in the classroom.  He also is a three-time member of Academic All-Pioneer Football League’s First Team and has been named to the PFL’s Fall Academic Honor Roll each season throughout his career.

Each of the nominees were required to have a minimum grade point average of 3.20 in undergraduate study and have been a starter or key player with legitimate athletics credentials.  There were 92 total nominees for this honor.

Blair was one of six total Pioneer Football League players to receive the accolade.