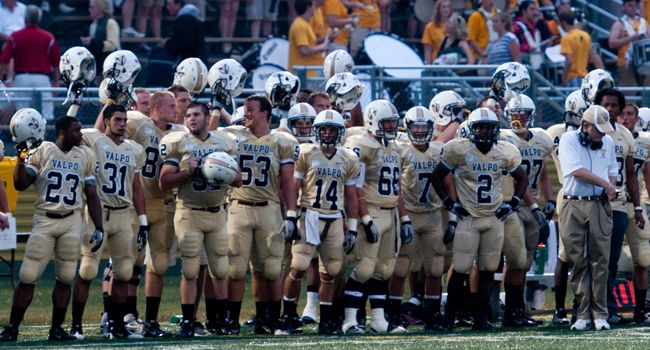 Valpo has added 36 players to its roster for the upcoming season. (William Liu)
Related Links

Valparaiso University head football coach Dale Carlson has announced the 36 members of his 2012 recruiting class which will begin playing for the Crusaders this fall.

“Our staff worked extremely hard to put this class together,” Carlson said.  “The staff traveled to camps last summer, watched many high school games, watched and graded hundreds upon hundreds of videos, and traveled over the winter contact period to see our top prospects. They spent many hours on the phone setting up visits and getting the commitments.”

Thirty-four of the 36 incoming Crusaders will be freshmen in the fall, with a pair of transfers also being added to the roster.  Among the recruiting class are 17 offensive players, 17 defensive players, and a pair of kickers.

“We have improved ourselves in a number of positions,” Carlson added.  “We wanted to get bigger in the offensive and defensive lines and we did just that. We needed to add depth in the secondary and I am pleased with the players
we added there.”

Eleven of the incoming players hail from Illinois while there are five student-athletes each coming from Indiana and Michigan among this year’s recruiting class.

“We competed against, and won, battles for recruits with the Ivy and Patriot League schools as well as others in the PFL,” Carlson concluded.  “We have a couple of recruits who were preferred walk-ons at BCS schools who chose us because of our academics and for the vision we have in building Crusader Football into a championship caliber team.”

The 36 players will arrive in August for preseason conditioning and practice before opening the regular season on Thursday night, Aug. 30, when the Crusaders host Saint Joseph’s (Ind.) at Brown Field.