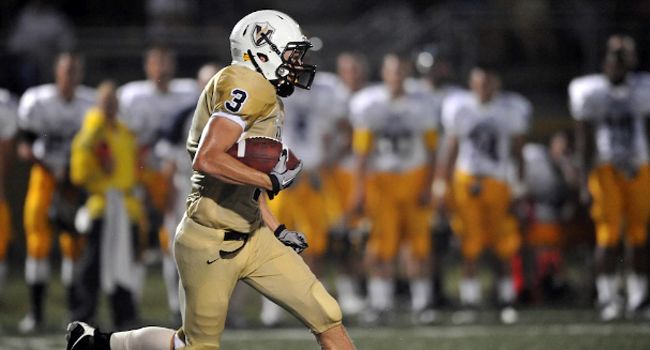 Senior Eric Slenk (Holland, Mich./Christian) caught a pair of touchdown passes on a rainy Saturday afternoon at Brown Field, but it was not enough for the victory, as Valparaiso dropped a 35-21 decision to Drake in Pioneer Football League action.

“There’s going to be five or six plays in every game that you have to make in order to win that game,” said Crusader head coach Dale Carlson.  “We had some opportunities that we had to convert on today, some of which we weren’t able to.”

The game got off to an inauspicious start for the Crusaders, as Mike Ratelle took the opening kickoff back 88 yards for a Drake touchdown just 12 seconds into the game.  But after Valpo was forced to punt on its first offensive possession, the defense came up with a big play, as a mishandled snap was recovered by redshirt junior Steve O’Bryant (Chicago, Ill./Tinley Park [Carthage]) and returned 20 yards, giving the Crusaders prime field position at Drake’s 33-yard line.

But the euphoria was short-lived, as two plays later, sophomore Ben Lehman (Elgin, Ill./Saint Edward Central Catholic) had a pass intercepted just outside the end zone, giving the ball back over to the Bulldogs.  Drake took advantage with a quick five-play, 68-yard drive, culminating in a 10-yard touchdown pass from Mike Piatkowski to T.J. James to give the Bulldogs a 14-0 lead with 7:07 to go in the first quarter.

Valpo was forced to punt on its next turn with the ball, but again came up with a big play to regain possession, as the punt was muffed and recovered by junior Alex Grask (Naperville, Ill./Central) deep in Drake territory.  Facing fourth-and-six on the Bulldog 24, the Crusaders elected to go for it, and Lehman hit Slenk with a 24-yard touchdown strike to cut the deficit to 14-7 late in the opening period.

The teams traded punts on the next four possessions, never getting inside the other team’s 40, before the Crusader defense stopped Drake on a fourth-and-two near midfield.  The offense went three-and-out, however, and after a touchback on the ensuing punt, the Bulldogs drove down the field, covering the 80 yards in eight plays and scoring on a one-yard touchdown run by Jacob Schmudlach to take a 21-7 lead into halftime.

Having deferred after winning the coin toss, the Crusaders received the kickoff to start the second half, and proceeded to run the ball down the Bulldogs’ throats with their opening possession.  Four different players carried the ball during the 13-play, 69-yard drive, 11 of which were rushes, while the drive was also aided by a roughing the passer call against Drake.  Ultimately, it was senior Ryan Lehr (Cincinnati, Ohio/Glen Este), on his fourth carry of the drive, who punched it in from three yards out to make it 21-14 with 9:46 to play in the third period.

Drake responded with a nearly six-minute long drive which covered 62 yards in 12 plays, kept alive by a pass interference call in the end zone on a fourth-down incomplete pass attempt.  Piatkowski closed the drive with a QB sneak on fourth-and-goal from the one-yard line to push the Bulldog edge to 28-14 with 3:48 to go in the third.

The Crusaders had a prime opportunity to put more points on the board on their next drive, but a 22-yard completion from Lehman to Slenk, which would have put the ball in the red zone, was called back on a holding penalty, and Valpo was forced to punt on that trip, as well as its next three possessions.

Drake added its final touchdown on a 29-yard touchdown run by Trey Morse with 3:38 to play in the game.  Redshirt junior quarterback Quinn Schafer (Fort Wayne, Ind./Bishop Luers) entered at quarterback for Valpo’s final possession, his first action of the season, and drove the Crusaders 78 yards in eight plays, hitting Slenk with a 23-yard touchdown to cap the drive and the scoring.

Redshirt freshman Jake Hutson (Blanchard, Mich./Montabella) got the start at tailback on Saturday and ran for a career-best 98 yards on 25 carries, pacing a Valpo rushing attack which out-gained Drake on the ground, 162-108.  Lehman finished the game 11-for-26 for 100 yards, while Schafer went 6-for-8 for 78 yards in his drive.  Slenk caught five passes for 81 yards and his two scores, while redshirt sophomore Fred Gladney (Milwaukee, Wis./Dominican) also finished with five receptions.  Fifth-year senior Cody Gokan (Mundelein, Ill./Mundelein) finished with a game-high 13 tackles to pace the Crusader defense, and freshman John Guilford (Spencer, Ohio/Black River) posted a pair of sacks among his five tackles.

Piatkowski went 22-for-36 through the air for Drake (5-2, 4-0 PFL) for 327 yards and one touchdown, with his favorite target being Schmudlach, who caught seven passes for 143 yards.  James posted 111 yards combined rushing and receiving as well for the Bulldogs.

“Obviously, the score is not acceptable,” said Carlson.  “However, I told the players we wanted to make sure to focus on one play at a time, and we were better at that today - better than we were the last two weeks.”

Valparaiso (0-6, 0-3 PFL) hits the road next Saturday to take on Dayton in league play.  Kickoff is slated for noon CDT, and the game can be heard live via the Valpo Sports Radio Network on WAKE, 1500 AM. Links for the live audio, as well as live stats, will also be available at www.valpoathletics.com.