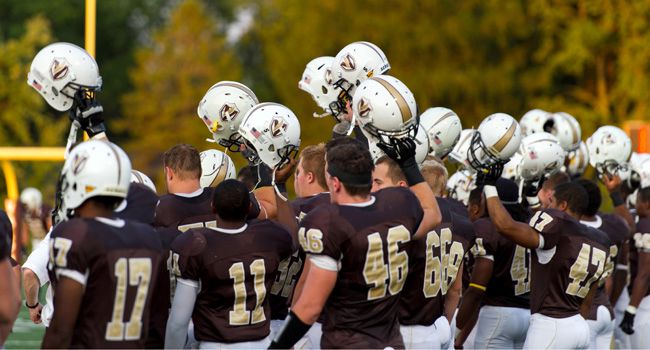 This Week in Crusader Football: The Crusaders wrap up the football season with a road contest against Morehead State on Saturday afternoon. A win against the Eagles would be the team’s first in a regular season finale since 2006.

Previously: The Crusaders battled through a 43-minute lightning delay Saturday before losing in overtime, 28-27, against Davidson College at Brown Field. Tanner Kuramata caught a touchdown pass from Eric Hoffman on the first possession of overtime, but after a missed extra point and a penalty, the Wildcats got in the end zone three plays later and earned the one-point win. It was the Crusaders first overtime game since 2008 and the first in Dale Carlson’s tenure.

On the Air: For the eighth straight season, the Valpo Sports Radio Network will be home to all 11 Crusader football games in 2012. All 11 games can be heard live on WAKE (1500 AM, Valparaiso), online through www.valpoathletics.com or by downloading the WAKE Radio app for Android or iPhone devices. Todd Ickow will handle all the play-by-play with Travis Lucian adding color commentary.

Head Coach Dale Carlson: Dale Carlson is 2-30 in his third season with the Crusaders and 112-133-3 overall entering his 24th season as a collegiate head coach. He arrived at Valpo from Ohio Dominican where he began the Ohio Dominican program from scratch in 2004, just as he did at Tri-State University prior to his tenure with the Panthers. He is the 16th head coach in Valpo history, and just the seventh since 1946.

Series Notes: Morehead State leads the all-time series between the two schools 14-3 dating back to 1996. The Eagles have won the last five meetings, including a 38-14 win in week four last season. Valpo’s last win in the series came in 2006, a 42-35 victory on the road. The two schools met in the 2003 PFL Championship game at Brown Field, with the Crusaders earning a 54-42 win.

Scouting Morehead State: Morehead State was picked to finish eighth in the Pioneer Football League Preseason Coaches' Poll. The Eagles, who boast the top scoring offense (34.6 ppg) in the PFL, return from the West Coast where they dropped a 41-28 decision against San Diego. Overall, the Eagles come in winners of two of their last three games. MSU is 3-2 at home this season, averaging 42.8 points per game at Jayne Stadium. The Eagles are led by senior quarterback Zach Lewis who is third in the PFL in passing yards (274.8 yards/game) while sophomore running back, Rees Macshara, is the PFL’s second leading rusher, averaging more than 80 yards per contest. Linebacker Jordan Hendrix enters as the league’s leading tackler with 112 stops on the season.

Last Season: The Crusaders captured their first win of the Dale Carlson era in the home finale last year by defeating Campbell, 34-31. Valpo ended the season 1-10 and 1-7 in PFL play, but returns plenty of experience for 2012, as six starters are back on both sides of the ball.

Grask Wraps Them Up: With a game-high and career-high 15 tackles against Davidson, defensive back Alex Grask has now been the team’s leading tackler eight times this season. The junior has five double-digit tackles efforts and ranks fourth in the PFL, averaging 10.4 tackles per game.

Derbak Attack: Junior linebacker Pat Derbak had one of the top tackling games of his career against Davidson College. Derbak tallied a career-best 13 stops against the Wildcats. Eight of his tackles were solo and three went for a loss.

Wood Dazzles Again: Senior punter Greg Wood was named the Pioneer Football League co-Special Teams Player of the Week for his efforts against Davidson College. Wood averaged a PFL single-game best 48.9 yards per punt, two of which traveled more than 60 yards. All eight of his kicks pinned Davidson inside its own 25 yard line.

PFL Championship Rematch: Valpo won its first-ever outright PFL Championship when it defeated Morehead State 54-42 in the PFL title game on Nov. 22, 2003. It was an offensive battle as the two teams combined for 956 total yards - 488 by Valpo and 468 for Morehead State. Former Crusader quarterback David Macchi, the program’s all-time leading passer, had a big game, throwing for 360 yards and four touchdowns, while rushing for a game-high 88 yards and two scores. The Crusaders had never played in a conference championship game dating back to 1919.

Wildcats Exact Revenge: The Crusaders overtime loss against Davidson was the team’s first overtime game since beating the Wildcats 35-29 in overtime in October of 2008.

Crusaders Picked Tenth in Preseason Poll: The head coaches selected Valparaiso to finish tenth in the Pioneer Football League this season according to the preseason poll. The prognosticators selected San Diego to take home the 2012 championship.