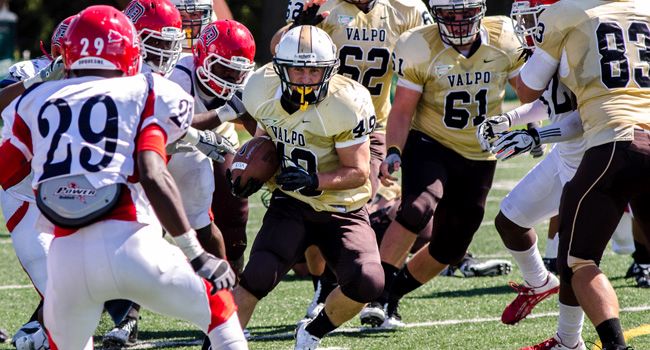 “We just did not react to the adversity very well today,” head coach Dale Carlson said. “We had some ball movement early, but unfortunately we didn’t capitalize on it.”

“In the last two weeks, I thought we did a pretty good job of if we gave up a big play, we kept our head in the game, we kept executing,” Carlson said. “Today we just kind of fell back on just trying to do too much.”

The Eagles jumped out to a 20-0 first quarter lead after the Crusaders first three drives stalled in Morehead State territory. The Crusaders took the opening kickoff and drove the ball inside the Eagles 40 yard line, but a pair of penalties backed Valpo up into a punting situation.

The Eagles, utilizing a no huddle offense for much of the game, put together a seven-play, 81-yard drive. On fourth and six from the Valpo 33, senior quarterback Zach Lewis hit Donte Sawyer for a 33-yard touchdown.

The Crusaders began their second possession at their own 49-yard line but were forced to punt three plays later from just across midfield. On the ensuing possession, Blake Stanley ran it in from three yards out and a missed extra point made it 13-0 with 6:09 remaining in the first quarter.

Eric Hoffman (Manitowoc, Wis./Lincoln) got the offense churning and the Crusaders threatened to slice into the Eagles lead. The sophomore quarterback picked up a first down on a nine-yard scramble and then found Matt Mallon (Rockford, Ill./East) for a 26-yard catch and run. The Crusaders penetrated inside the Eagles’ five yard line, but on fourth and inches from the two, a false start penalty forced a field goal attempt. Mike Pando’s (Hamilton, Mich./Hamilton) 23-yard try missed wide left.

Following a touchback, Brandon Bornhauser ripped off an 80-yard touchdown to put the Eagles in front 20-0 with 2:51 remaining in the opening quarter.

The Morehead State lead swelled to 34-0 before the Crusaders got on the board in the second quarter. Hoffman led the Crusaders on an 11-play, 75-yard march before Jake Hutson (Blanchard, Mich./Montabella) scampered in from three yards out for his eighth touchdown of the year. Cole Anderson (Highlands Ranch, Colo./Valor Christian) had a career-long catch and run of 21 yards to set up the score while Tim Bennett (Joliet, Ill./Joliet Catholic) caught three passes on the series. Valpo trailed 34-7 with 6:36 remaining in the half.

After Sawyer returned a kickoff for a touchdown, the Crusaders were forced into a punting situation. Greg Wood’s (Libertyville, Ill./Libertyville) punt was misplayed by Justin Grier and recovered by Alex Grask (Naperville, Ill./Central) at the Eagles’ 27-yard line.

The Crusaders moved inside the Eagles’ 10-yard line and settled for a 27-yard field goal from Pando cutting the margin to 41-10 with 1:57 remaining in the half.

In the second half the Crusaders pieced together two scoring drives of more than 70 yards. Anderson caught a nine-yard touchdown pass to cap off a 14-play, 76 yard drive in the third quarter. Ben Lehman (Elgin, Ill./Saint Edward Central Catholic) entered in the fourth quarter and threw a 37-yard strike to running back Jabril Baker (Indianapolis, Ind./North Central (Wabash) ), who scurried in for the first touchdown of his career.

Hutson paced the Crusader’s ground game, amassing 107 yards on 18 carries. Through the air Hoffman was 26-of-39 for 200 yards and a touchdown. Bennett caught a team-high eight passes for 29 yards.

Grask led the Crusaders with nine tackles while senior linebacker Cody Gokan (Mundelein, Ill./Mundelein) racked up seven stops, including a fumble recovery in the fourth quarter.

In his final collegiate contest, Wood punted five times, four of which pinned the Eagles inside the 20-yard line.

Morehead State’s Rees Macshara rushed for 211 yards on the ground while Sawyer made six catches for 186 yards as part of a four-touchdown performance.

“Our team has come out to practice everyday, practiced hard,” Carlson said. “Our next step is we have to get them to translate that to game situations.”