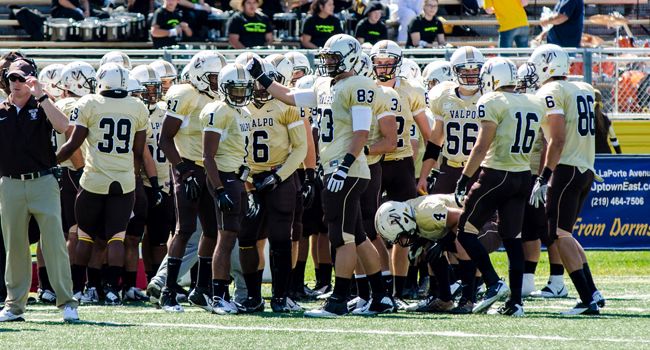 Parents and fans got their first look at the 2013 Crusaders Saturday afternoon at Brown Field in the Brown vs. Gold game. Though the Brown squad came away with a 33-0 victory, the final score remains an afterthought compared to the opportunity to see what individuals can do in a game setting.

"I was pleased with the way the guys responded. Overall, the guys that we thought could play stepped up, and we had some players on the Gold team - especially defensively - do some good things," head coach Dale Carlson said afterwards.

Four quarterbacks (Ryan Gorski, Ben Lehman, Trae Hoeske, and Eric Hoffman) cycled in and out as each received several series with both sides. Junior tight end Kent Warren made a few acrobatic catches, while wide receiver Fred Gladney also hauled in a number of passes and contributed with considerable yards after the catch.

With some success in the air, the running game opened up nicely. Freshman running back Denzell Conway burst through a number of holes. Sophomore Brandon Hall scampered in for a touchdown run as the 5'9'' 215-pound back powered through tackles to find the end zone.

Carlson felt the scrimmage served its purpose in providing a showcase with which to evaluate players and dictate playing time.

"All in all, it looked like we came out pretty healthy. Now, it's time to get ready for North Dakota," Carlson concluded.

The Crusaders open their season Thursday, August 29th in Grand Forks versus the University of North Dakota. Kickoff is scheduled for 7:00 pm CT.