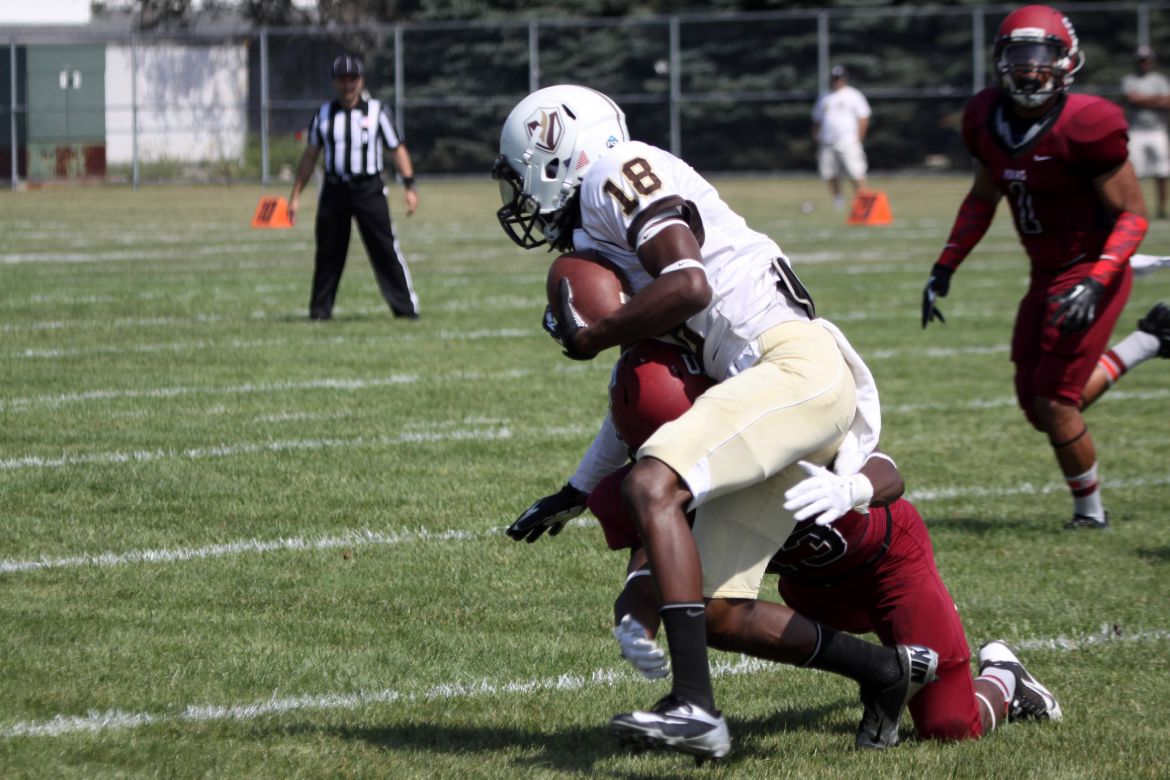 This Week in Crusader Football: Brown Field will see its first football game of the season Saturday as the Crusaders play host to William Jewell.  Valpo dropped its first two road contests of the season at North Dakota and Saint Joseph’s (Ind.) respectively. The Brown and Gold will turn to some home cooking as the Cardinals also seek their first win of the 2013 season as well.

Head Coach Dale Carlson: Dale Carlson is 2-33 in his fourth season with the Crusaders, and 112-135-3 overall in his 25th season as a collegiate head coach.  He arrived at Valpo from Ohio Dominican where he began the Ohio Dominican program from scratch in 2004, just as he did at Tri-State University prior to his tenure with the Panthers.  He is the 16th head coach in Valpo history, and just the seventh since 1946.

Nice to Meet You: This will be the first ever meeting between William Jewell and Valparaiso on the gridiron. William Jewell is a member of the Great Lakes Valley Conference - the same as last week’s foe Saint Joseph’s. The Cardinals were picked to finish fifth in the GLVC coaches poll, one spot behind the Saint Joseph’s Pumas.

Scouting William Jewell: The Cardinals are in their second season of competition in both NCAA Division II and the Great Lakes Valley Conference.  William Jewell dropped its season opener last week to Concordia University (Neb.) 30-15. Head coach Jerod Kruse is 10-23 in his fourth year and returns 18 starters and 43 players from a squad that went 2-9 overall, 1-7 in conference last year.  Under center for William Jewell is senior QB Sean Shelton. Shelton has been a four-year starter for the Cardinals. Last season’s GLVC Freshman of the Year Thomas Cook will look to launch the running game. Cook rushed for 57 yards on 15 carries in the season opener.

Week in Review: Valpo dropped a back-and-forth battle last Saturday 34-31 to Saint Joseph’s (Ind). The Pumas rallied with 16 points in the final stanza capped by a Gavin Voss 29-yard field goal with 4:51 to play. For the Crusaders, Jake Hutson averaged over five yards a carry en route to a 128-yard day on the ground. The running back also caught five passes. QB Eric Hoffman hooked up with three different receivers for touchdown passes as he finished the afternoon with just under 300 passing yards and no interceptions.

Hoffman Under Center: Redshirt junior quarterback Eric Hoffman is in his third season as the starter. Hoffman completed nearly 65.5% of his pass attempts a year ago. He’ll look to build on last week’s performance versus Saint Joseph’s in Week 3 against a William Jewell defense that surrendered over 2,800 passing yards and 34 TD passes a season ago.

Crusaders Picked 10th in Preseason Poll: The head coaches selected Valparaiso to finish 10th in the Pioneer Football League this season according to the preseason poll.  The prognosticators selected San Diego to take home the 2013 championship.

Back in the Backfield: Sophomore running back Jake Hutson made an impact as a redshirt freshman in 2012.  Hutson earned the most carries of any running back, rushing 152 times for 753 yards and eight touchdowns, and also tallied  35 receptions for 266 yards.  William Jewell yielded 26 rushing TDs in 2012.

Catch Me If You Can: Six different receivers caught passes in last week’s shootout. Redshirt junior Fred Gladney led the way with five catches - one for a TD - and 98 yards. Tanner Kuramata got in on the fun as he caught four passes for 87 yards and a score. Junior tight end Kent Warren hauled in the other touchdown as part of a four catch day that netted him 50 receiving yards.

Just for Kicks: The Crusaders are still adjusting to life after Greg Wood. Redshirt junior Mike Pando punted eight times in the season opener, but redshirt freshman Alex Kozlowski was assigned punting duties in Week 2. Kozlowski performed admirably, recording an average of 42 yards per punt on five attempts with a long of 58 yards. After the Crusaders missed the PAT on their opening drive score, freshman Jacob Newman was called upon in the kicker role. Newman nailed two PATs and split the uprights on a 37-yard field goal attempt.

On the Defense: Seniors Pat Derbak and Alex Grask both recorded four solo tackles and two helpers in Week 1. Captain Alex Green had a monster Week 2 collecting 14 tackles. This will be the first game the Crusader secondary will not be facing an All-American wide receiver. Thomas Cook has quickly become a favorite target for Sean Shelton, as evidenced by his eight catches last week.

Spread the Love: The Crusader football team has joined in on the Spread the Love Campaign. Fans are asked to bring a jar of peanut butter to Saturday’s game to help feed the 106,000 hungry people in local Lake and Porter Counties.