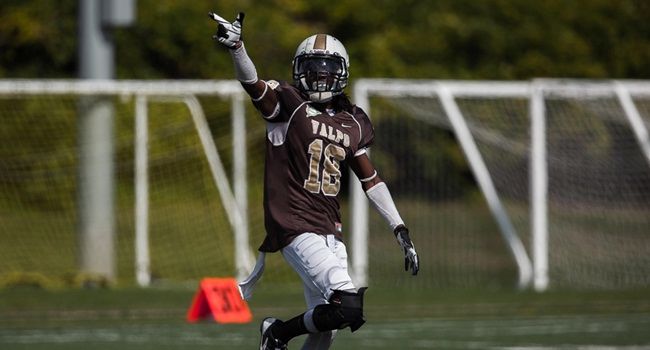 An offensive extravaganza that featured 1,093 combined total yards was decided by an overtime goal line stand on 4th and 1. Campbell quarterback Brian Hudson was denied just a couple feet from the Valpo end zone on the final play of the game sending the 3,357 Crusader faithful into jubilation following the 49-42 marathon win.

"It's good to win on homecoming. We said we had a clean slate and now we're 1-0 in the PFL," head coach Dale Carlson said.

Like clockwork, quarterback Eric Hoffman (Manitowoc, Wis./Lincoln) hit a Crusader receiver for a lengthy touchdown catch on the opening drive. Hoffman found Fred Gladney (Milwaukee, Wis./Dominican) down the Valpo sideline for a 38-yard touchdown toss to cap a scoring drive that took less than 90 seconds off the clock. The TD catch was Gladney's second snag of the four-play drive. Hoffman and Gladney connected for a 24-yard chain-mover on the second play from scrimmage.

Armed with a 7-0 lead, Valpo appeared poised to tack on to its lead after Melvin Graham III (Indianapolis, Ind./North Central) camped under a deflected Hudson pass and ran it back to the Campbell 42-yard line. Faced with a 3rd and 6 on the impending drive, Hoffman's pass attempt was picked off by Aaron Nichols and ran back 43 yards to the Valpo 32.

The Camels drove inside the Crusader 10-yard line but settled for three points after a quarterback keep didn't net the necessary seven yards on third down.

The Campbell defense buckled down on its next possession forcing Valpo to kick away following a three-and-out. However, the long snap to Alex Kozlowski (Novi, Mich./Detroit Catholic Central) sailed over his head, and the punter was sent racing back towards his own end zone before booting it out of play. The safety made it a 7-5 game.

Graham III wreaked more havoc on the defensive side of the ball in the first quarter, causing a fumble following a pass completion. Freshman Brandon Doepke (Fitchburg, Wis./Madison West) pounced on the loose ball at the Campbell 36.

Hoffman and Gladney continued to pick apart the Campbell secondary as a 36-yard touchdown play on the first play of the drive moved it back to a two-possession game.

Campbell led a more patient, balanced drive down field in its next possession. In the waning minutes of the first quarter, Kurt Odom scampered in from 19 yards out to cap a six play-65-yard drive. A curious decision to attempt a two-point conversion backfired for Campbell head coach Mike Minter and the score stayed at 14-11 at the conclusion of the first quarter, a quarter that spanned over 45 minutes and saw 40 total offensive plays.

The following Valpo drive stalled at its own 37-yard line but a booming punt by Kozlowski pinned the Camels inside their own 20-yard line.

Despite less than ideal field possession, the Camels constructed a seven play-83-yard drive that gave the visitors their first lead of the afternoon.

Hoffman completed three passes on the Crusaders next offensive possession, but none were for more than four yards. Forced to kick, Kozlowski didn't get all of his punt as it traveled 28 yards and Campbell received the ball near midfield.

Endowed with a short field, Hudson and the Campbell offense used 13 plays to extend the Camel lead to 25-14.

Down eleven points, Hoffman stepped up and led the Crusaders into the end zone on the subseqeuent possession. He went 5-of-5 passing - to four different receivers - before Jake Hutson (Blanchard, Mich./Montabella) collected his first of three rushing touchdowns of the game. The 71-yard drive ate up just 1:33 of the clock.

The Crusaders trailed 25-21 at the half.

The Camels opened up shop on their own 28-yard line to open the second half. Utilizing a pair of third-down conversions, they maneuvered downfield despite hamstringing themselves with two false start penalties. A defensive holding penalty thrust Campbell into a goal-to-go situation. To their credit, the Crusader defense kept Campbell out of the brown grass. However, a Jarrett Ozimek 20-yard field goal from the left hash mark did put Campbell ahead 28-21.

Valpo was knocking on the door during the ensuing possession after Tanner Kuramata (Rancho Cucamonga, Calif./Claremont) was on the receiving end of a 54-yard passing play that moved the Brown and Gold to the opposing 5-yard line. Hoffman found Hutson who appeared to be down before Camel safety Brandon Stegall forced a fumble that was scooped up by teammate Marcus Maynard. The play was a source of confusion for the officiating crew who huddled before eventually ruling it a fumble.

After the Crusader defense forced a three-and-out, the offense tied the game up at 28-28 on its next drive. Hutson had five carries on the 48-yard drive including an 8-yard TD rush.

Hudson connected with receiver DeShawn Jones on a 3rd and 16 before sophomore Cody Cotton (Maywood, Ill./Walter Lutheran) stripped Jones at the Valpo 30-yard line. Fellow sophomore John Guilford (Spencer, Ohio/Black River) recovered the fumble and brought it out to the Valpo 45-yard line.

Valpo took advantage of the short field as Hoffman threw one up for Kuramata that resulted in a 46-yard touchdown score. Up five, the Crusaders wisely opted to go for two and Hoffman went back to the well on the two-point conversion when he hit a wide open Kuramata in the back of the end zone. The Crusaders took the lead 42-35 with just under five minutes to play.

With their backs against the wall, the Camels responded with a nine play, 66-yard touchdown drive finalized by a 14-yard Kurt Odom carry. Fortunately for Valpo, the two-minute scoring drive left 2:37 on the clock. Coupled with two timeouts, the Crusaders had plenty of time to assemble one last drive.

The Brown and Gold successfully moved across midfield but a pass on 3rd and 10 to freshman Denzell Conway (New Orleans, La./MICDS (Mo.) left the home team four yards shy of the first down marker.

A last-second hail mary attempt by Campbell went for naught and the packed stands were treated to extra football.

The Camels won the coin toss and chose to go on defense for the first of alternating possessions. The Crusaders needed just two plays before Hoffman dished out his fourth touchdown pass of the day, this one to Andrew Cassara (Mokena, Ill./Aurora Christian) from 12 yards out. Newman's PAT gave Valpo a 49-42 lead.

Beginning on the Valpo 25-yard line, Hudson hooked up with receiver Chad McMichael for a 10-yard completion to move the chains. Hudson kept the ball on a 2nd and 2 from the Valpo 7 and two-stepped his way three yards forward.

Operating under center on the final play, Hudson kept the ball and attempted to sneak in the end zone behind the left guard. But senior Patrick Derbak (Schaumburg, Ill./Schaumburg) and Guilford penetrated the line and kept the quarterback three feet shy of sending the game into a second overtime.

"The difference I see in our team from the first three years is that our kids fight all the way to the end. Our defensive guys believed they were going to make the stop. You could see it in their eyes," Carlson said.

Hoffman finished the day 33 of 47 passing for 407 yards (his second consecutive game of 400-plus yards of passing) with four touchdown throws. Hutson quietly rushed for 98 yards and three TD carries.

Gladney enjoyed another remarkable day at wide receiver. The sophomore hauled in ten passes and racked up 156 receiving yards to go along with the two touchdown catches. Kuramata also had his second straight game of 100 or more receiving yards as he had seven grabs for 117 yards.