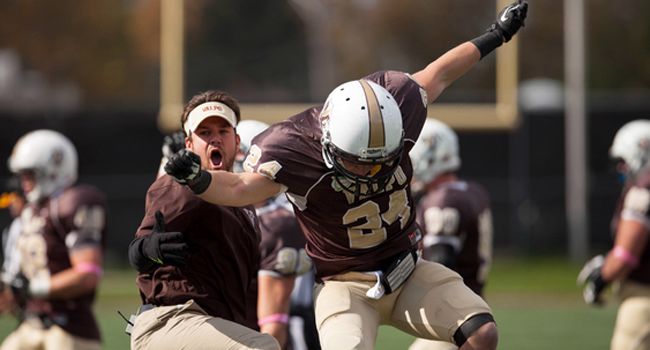 This Week in Crusader Football: Valpo will make the trek across I-80 this weekend as it travels to Des Moines, Iowa for a Saturday tilt with the Drake Bulldogs. The Bulldogs are back-to-back PFL champions, but with a 2-2 record in league play  (including a loss to 4-0 Butler), a three-peat doesn’t appear to be in the cards. The Brown and Gold are seeking their first ever win at historic Drake Stadium. The end of last week’s games represented the halfway point in the PFL schedule and the Crusaders sit one game back of the Bulldogs.

On the Air: For the eighth straight season, the Valpo Sports Radio Network is home to all 11 Crusader football games in 2013.  All 11 games can be heard live on WVUR (95.1FM, Valparaiso), online through www.valpoathletics.com.  Todd Ickow will handle all the play-by-play, with Brad Collignon adding the color commentary this week. Live stats will also be available through www.valpoathletics.com.

Head Coach Dale Carlson: Dale Carlson is 3-37 in his fourth season with the Crusaders, and 113-140-3 overall in his 25th season as a collegiate head coach.  He arrived at Valpo from Ohio Dominican where he started the Panther program from scratch in 2004, just as he did at Tri-State University prior to his tenure with Ohio Dominican. He is the 16th head coach in Valpo history, and just the seventh since 1946.

All-Time Series: Drake leads the all-time series 17-3 over Valpo including nine consecutive wins. The two teams have faced each other every year since 1993. The Crusaders last win over the Bulldogs came almost exactly ten years ago to the day from Saturday. Valpo beat Drake 51-45 in overtime at Brown Field on October 25th, 2003. Drake beat the Brown and Gold 35-21 last October in Valparaiso.

Scouting Drake: The Bulldogs enter Saturday’s game winners of two of their last three. Drake’s scoring defense ranks in the top quartile of the Pioneer Football League (22.6 points/game). They dropped a 24-14 contest to Butler in Indianapolis last Saturday. Very few offensive numbers stand out for Drake, but its defense - especially on 3rd down - gives opposing offenses headaches. Chris Creighton is 41-21 in his sixth season as head coach. He served as head coach at Wabash College and Ottawa (Kan.) University before arriving in Des Moines. Creighton’s career coaching record is 136-45 (.751). The Bulldogs will start junior Andy Rice under center. The QB out of Stevens Point, Wisconsin is coming off a 330-yard passing day against Butler. Rice is second in the PFL in interceptions with eight. Wide receiver Nick Rosa has been his most trusted target in 2013. The fifth-year senior has caught 37 passes for 537 yards and five touchdowns. Linebacker John Hugunin is the anchor of the Bulldog defense. Hugunin’s 78 tackles are just one behind Alex Green for the PFL lead, and his 46 solo stops are tops. Defensive end Brandon Coleman has been a catalyst up front for Drake with seven sacks (1st in PFL), three forced fumbles (t-1st), and nine tackles for loss (2nd).

Week in Review: Valpo suffered a 42-28 loss to Morehead State last week at Brown Field. The Crusaders led the Eagles 28-19 at halftime, but were unable to put any points on the board in the second half. The Brown and Gold were without the services of receiver Tanner Kuramata in the second half. Kuramata was ejected for targeting late in the second quarter. Junior Andrew Cassara stepped up in Kuramata’s absence and caught a career-high 12 passes for 135 yards and a TD. Senior Pat Derbak was active all afternoon as the linebacker forced a fumble, and picked off an Austin Gahafer pass. Derbak finished Saturday’s contest with a game-high 15 tackles.

Checking the Leaderboard: Sophomore Alex Green is fifth in all of FCS football with an average of 11.3 tackles per game. Eric Hoffman ranks 12th in passing yards per game with his 287.6/game figure. The Valparaiso offense as a whole checks in at 66th in total offense at 375.1 yards per contest. The passing unit is 15th in FCS football with an average of 295 yards/game.

Record Watch: Quarterback Eric Hoffman set the school record for most career passing completions last week. Scott Lange’s 600 completions now ranks second to Hoffman’s 628. Hoffman is currently 401 passing yards behind Lange for 2nd all-time in Valpo history.  At 1,004, the redshirt junior is 177  in back of Lange for most attempts in a career. Hoffman needs 329 yards of total offense Saturday to surpass Nick Browder for second all-time in that category.

Spread the Wealth: Five different receivers have registered at least 16 receptions so far in 2013. Cassara has been active the past four weeks, hauling in 33 passes. With Gladney sidelined, Tony Taibi and Steve O’Bryant are playing a more prominent role in the Crusader offense.

The Big Green: Alex Green has flourished at middle linebacker this season for the Crusaders. The sophomore leads the PFL with 79 total tackles and his 45 solo stops are second best. As his development progresses, the Crusader linebackers are surfacing as a position of strength.

Sack Streak: After a strong second half in 2012, sophomore John Guilford is picking up right where he left off. The defensive end has notched a sack in each of the last four tilts. His five sacks on the season are a team-high. Guilford has also recorded 26 tackles the last four weeks including ten at Marist on Oct. 5th.